Back From the Shaw

I'm back now from the Shaw Festival and the conference being held in Niagara-on-the-Lake by the International Shaw Society. 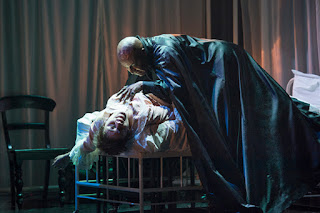 In addition to seeing some great plays by Bernard Shaw (Androcles and the Lion and Saint Joan),  I caught a preview of the festival's production of Dracula. At first, I didn't particularly care for the stage adaptation by Liz Lochhead, which was originally done at the Royal Lyceum in Edinburgh in 1985. However, as the play went on, it grew on me, and I ended up liking it.

Lochhead combines characters, switches quickly back and forth between different parts of the book, and makes some plot changes I wouldn't have made as an adapter, but if you think of the production as its own work, rather than simply an imitation of Bram Stoker's novel, it's actually quite enjoyable. Lochhead is more interested in 1980s feminism than the 1890s paranoia that drove Stoker, but the play's steamy updating of the story's finale was brilliant.

I was at the Festival to deliver a paper at the ISS conference, and I greatly enjoyed some of the presentations given by other conference attendees. Peter Gahan gave a talk called "Bernard Shaw's Religion of Equality" in which he talked about Shaw's activities with the socialist Fabian Society. Beatrice and Sidney Webb, who co-founded the London School of Economics, stressed state ownership of the means of production, while Shaw emphasized redistribution of wealth. For Shaw, the ultimate test of equality was inter-marriageability. Classism would only be dead when an individual from one economic group could marry a member of any other group without raising eyebrows.

After Gahan's talk, Tony Stafford spoke about animal imagery in Saint Joan. Though he said he originally got involved in the topic due to the bird imagery in the play, I was most struck by the way he pointed out how important horses are in the piece, with Joan being glad at the end that her horse has not been forgotten. Charles Del Dotto spoke about the sublime in the late plays of Shaw, citing (among other things) A.C. Bradley's adage about waste being a defining element of tragedy. Anton Jesensek rounded out that session by speaking about the reception of Saint Joan in Italy, which had been performed initially in both French and Italian translations. 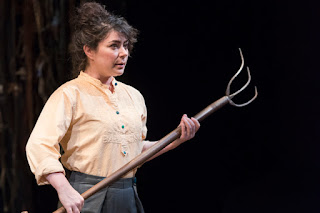 That night I saw 1837: The Farmer's Revolt. Rick Salutin wrote the play together with Theatre Passe Muraille in 1973 to tell the story of an ill-fated uprising in what is today Ontario against the corrupt colonial government. Had the farmers been better organized, they might have succeeded in establishing a Republic of Canada. Unfortunately for them, their rebellion was brutally put down, and the play ends with a harrowing image of some of the surviving farmers being hanged. It wasn't until 1867 that the various colonies the British still held in North America were brought together as the Canadian Confederation.

The following day, Fintan O'Toole gave a talk on what he called the 10 rules of Shavian theatre. These included forgetting cause and effect, accepting that motivations don't matter, having drama shape character rather than the other way around, remembering that anti-climax is a good thing, accepting that form is a trap, discovering morals rather than vindicating them, realizing that acting is not truth, accepting that the sounds you make are not who you are, banishing shame and suicide, and embracing the fact that nothing can be undone.

Michael O'Hara, president of ISS, gave a great talk on the history of Androcles and the Lion, which Shaw wrote in 1912, getting mixed reviews in London, but then taking the United States by storm. There was a 1915 production in New York, and a revival 10 years later featured Edward G. Robinson as Caesar. A 1935 all-black production played in various city parks in Chicago, and in 1937 the Negro Company did the show in Seattle. Perhaps the most famous production was the 1938 staging by the Negro Theatre Project in New York, but a production the following year in Atlanta was notable for its use of jazz. Marc Blitzstein composed incidental music for a production of the play in 1946, and Richard Rogers later musicalized it for television in 1967.

There were plenty of other fine presentations, but I'll mention just one more. Jen Buckley gave a paper called "Melodrama of Ideas" about Branden Jacobs-Jenkins's An Octoroon. She argued that melodrama can indeed be a genre that works intellectually as well as emotionally. My last night in Niagara-on-the-Lake, I got to see Jacobs-Jenkins's play, and I have to say I agree. An Octoroon was hands-down the best thing I saw at the Shaw Festival. I was familiar with the original (The Octoroon) by Dion Boucicault, and in addition to commenting on the play, Jacobs-Jenkins fixes many of its problems.

I'm not sure when I'll get up to the Shaw Festival again, but I certainly enjoyed my visit! 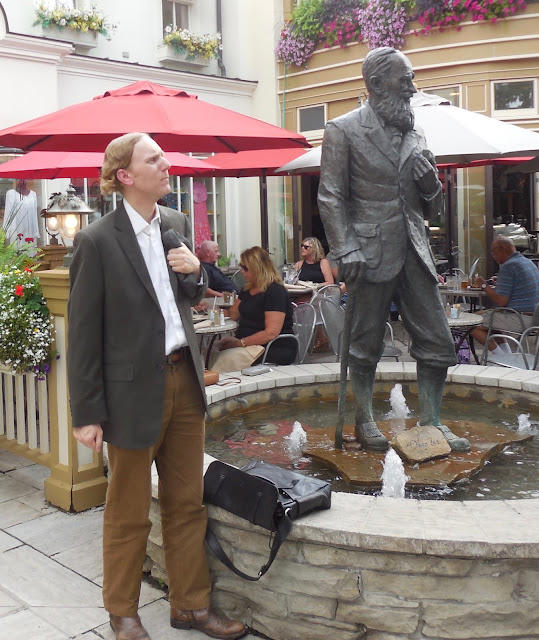 Posted by James Armstrong, Playwright at 10:24 AM