Herman Melville, author of Moby-Dick, was born 198 years ago today.

I have a special attachment to Melville, since I adapted Moby-Dick for the stage. My play was developed through the Cimientos playwrights program at IATI Theater and later had a reader's theatre presentation at the Abingdon Theatre Company. Its world premiere was in 2015 at Wellfleet Harbor Actors Theater.

Below is a picture of Lee Seymour as Ishmael and Wesley Volcy as Queequeg in the production at WHAT. The photo is by Micheal and Suz Karchmer. 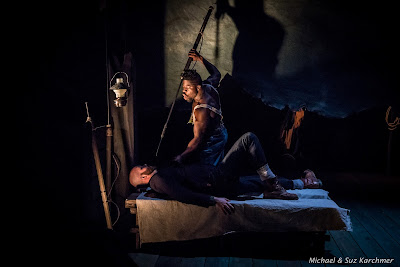 Posted by James Armstrong, Playwright at 9:23 AM