Black-Eyed Susan for the Toy Theatre

I've been spending a lot of time lately looking at plates for 19th-century toy theatres. Readers of this blog might remember a popular post I did showing a toy-theatre version of Great Expectations by Charles Dickens. 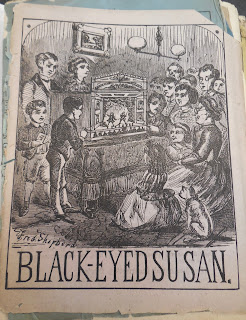 The most popular play to be adapted for the toy theatre in the 19th-century was Isaac Pocock's The Miller and His Men. My own personal experience with the art form, however, began when I was at a Dickens conference in Canterbury, England. A gentleman there performed a toy-theatre version of Black-Eyed Susan by Dickens's friend and colleague Douglas Jerrold.

I watched in amazement while a single individual manipulated paper scenery and small cardboard characters to enact the drama. In the 19th century, a reader would recite the lines, sometimes working from a small prompt book with an abridged version of the play. In this case, the performer played a CD with his own voice reciting all the parts. He was apparently too preoccupied with working the mechanics of the theatre to say the lines as well!

Black-Eyed Susan was a popular play to adapt for the toy theatre. As the illustration from an abridged script shows, the juvenile theatricals were popular with both boys and girls. (And apparently cats, too!) In the back would be a backdrop, something like this print issued by J. Bailey: 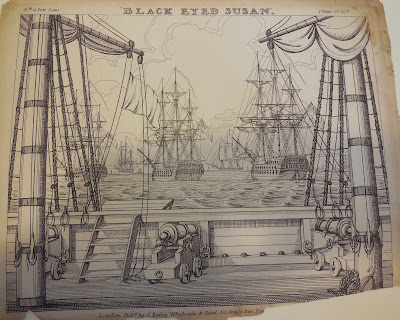 Prints generally cost a penny if you wanted a plain, black-and-white version. You could also spend more for color prints. Often, however, children (or perhaps their parents) would color the plates by hand, which must have been part of the fun. Here's a hand-colored plate for Black-Eyed Susan: 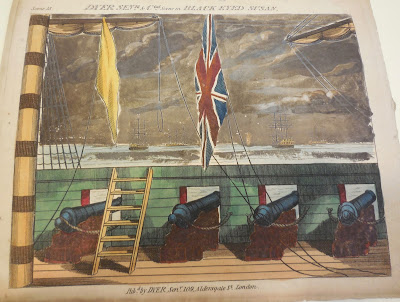 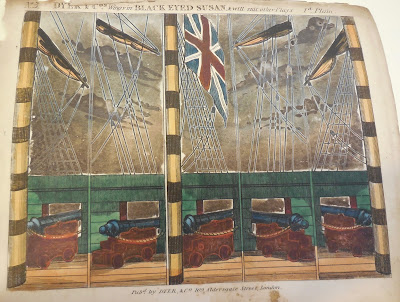 Of course, a play isn't a play without characters. Toy-theatre owners would buy plates of characters from a play, color them, cut them out, and paste them to a card-stock backing to make them stand up properly. These characters could be inserted in slits in floor of the toy stage and manipulated from behind and underneath. 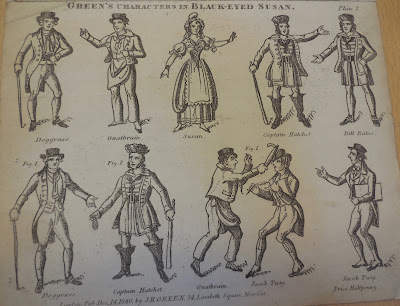 Just as real theatres reused stock scenery for different plays, toy-theatre owners could reuse elements from one play for multiple toy productions. Printers sometimes offered plates like these which could be used with multiple dramas: 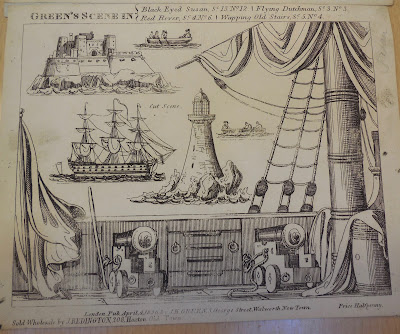 By the 20th century, the fad seems to have died down, but these home theatricals were popular for many years. They fed young people's imaginations and allowed them to savor the memory of entertainments they had enjoyed on stage. In many ways, I suspect the Star Wars figures of my own generation were not terribly different.

Posted by James Armstrong, Playwright at 8:35 AM