Originally a painter, Isaac Pocock began writing for the stage with the musical farce Yes or No? which opened in 1808 at the Haymarket Theatre in London. More farces followed, such as the 1810 smash Hit or Miss! with Charles Mathews.

Pocock wrote numerous melodramas, the most famous being The Miller and His Men, which featured music by Henry Bishop. The composer would later become famous for writing the melody to "Home, Sweet Home," which first appeared in John Howard Payne's play Clari, or the Maid of Milan. Pocock later wrote his own "operatic entertainment" entitled Home, Sweet Home!, which also featured Bishop's music and included the famed Madame Vestris in the cast. 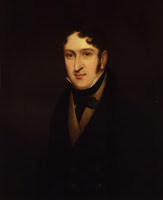 Artistic training can come in handy, as when Pocock painted this portrait of his famous collaborator, Bishop. Pocock's stage directions also suggest a penchant for visual composition. Consider the opening description from The Miller and His Men:

The Banks of a River in Bohemia. On the right, in the distance, a rocky eminence, on which is a windmill at work--a cottage in front, R. Sunset.

Music. The MILLER'S MEN are seen in perspective, descending the eminence--they cross the river in boats, and land near the cottage, with their sacks, singing the following round....

Clearly, Pocock knew how to take advantage of the scenic effects available to him. These effects helped to make The Miller and His Men the most popular play of all for 19th-century toy theatres. At the end of the story, the mill explodes, and this dramatic scene was used in advertising toy theatre versions of the play. A young Charles Dickens is said to have delighted his schoolmates with toy-theatre productions of Pocock's melodrama. 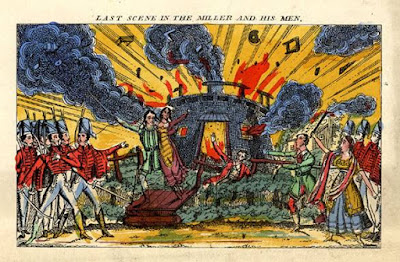 Later, Pocock penned operatic dramas adapted from the novels of Sir Walter Scott. His adaptation of Rob Roy Macgregor opened in 1818 at Covent Garden with William Charles Macready in the title role. This play was also a favorite of the toy theatre.

Towards the end of his life, Pocock provided the text for the Christmas equestrian spectacular King Arthur and the Knights of the Round Table, which ran during the winter of 1834-35. He passed away later that year, but still had a couple of his plays produced posthumously.
Posted by James Armstrong, Playwright at 10:39 AM