My book review of The Oxford Handbook of the Georgian Theatre just came out in the most recent issue of Theatre Journal. 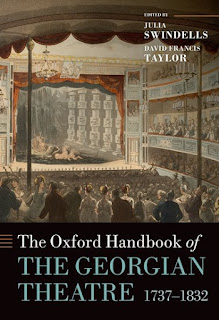 TJ is an official publication of the Association for Theatre in Higher Education, so it has a circulation of a couple thousand people. I'm very happy my piece was included.

And yes, the Handbook is a great resource for anyone interested in eighteenth- and early nineteenth-century drama. It officially covers British drama from 1737 to 1832, though it occasionally ventures outside that timeframe as well.

Julia Swindells, who passed away not long ago, and David Francis Taylor edited the volume, which contains 40 essays spanning the fields of acting, writing, scenic design, music, dance, and more. The book does a good job both of giving historical context and engaging with current theoretical ways of framing the past.

You might notice that on the cover is an image of Sadler's Wells, rather than one of the royal patent theatres in London at the time. As the use of an image of a popular "minor" theatre implies, the book is as much interested in popular culture as it is in high art, if not more so.

Unfortunately, the price tag is a bit hefty. The book retails from Oxford University Press at $170. Get your local library to order it, though. It's worth it!
Posted by James Armstrong, Playwright at 5:53 AM