Madame Vestris and the London Stage

Lucia Elizabeth Bartolozzi, later known as Madame Vestris, was born into an interesting family, to say the least. Her father, Gaetano Bartolozzi, was an art dealer and son of an engraver to King George III, and her mother, Therese Jansen Bartolozzi, was a musician to whom the great Haydn had dedicated five different piano pieces.

When she was just 15, she met Armand Vestris, a ballet dancer at the King's Theatre in London. The two married at the church of St. Martin's-in-the-Fields in 1813. At the age of 18, Madame Vestris made her debut as a performer, taking the title role in Peter von Winter's opera Il Ratto di Proserpina. She made quite an impression, winning even the admiration of Princess Charlotte.

Though Madame Vestris was gaining the affection of the crowds, that audience did not include her husband. He took her to Paris, where he hoped to renew his career, and then left her there, heading off with another woman to Naples, where he had an engagement at the Teatro San Carlo. They never saw each other again.

Returning to London, Madame Vestris made her debut at Drury Lane in the comic opera The Siege of Belgrade. Seeing her there, the critic Leigh Hunt called her "a true singer, a pleasing actress, and a handsome woman; three graces not very frequently united in the same woman." 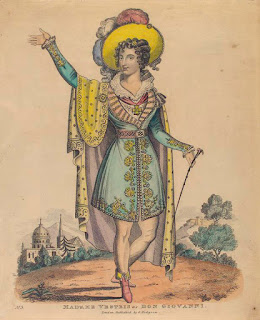 This "handsome woman" had such fine legs that audiences flocked to see her dressed as a man. She appeared as a Persian prince in Artaxerxes and then as the great libertine in Giovanni in London, a burlesque sequel to Mozart's Don Giovanni that follows the arch-rake after he gets kicked out of Hell for trying to seduce the Furies. More trouser roles followed, including Macheath in John Gay's The Beggar's Opera.

Hunt wrote disapprovingly of these roles, claiming: "The more we are pleased with her in trousers and boots, the more we long to see her out of them.... In a word, we never remember an instance of an actress who contrived to be at once so very much of a gentleman and yet so entire and unaltered a woman." Whether or not Hunt was entirely aware of the sexual nature of these comments, the male admirers of Madame Vestris were certainly drawn to her, and for more than just her acting skills.

By 1822, Madame Vestris had taken up residence on Curzon Street, where she earned the nickname "The Siren of Mayfair." She gathered a bevy of admirers, jokingly referred to as her "Vestry-men." Her husband died in 1825, but it was not as if the swells of London had considered her unavailable before then. That same year, Madame Vestris had her breakout hit, appearing opposite John Liston in John Poole's comedy Paul Pry at the Haymarket. She sang the song "Cherry Ripe," a ditty whose sexual double-entendres were surely not lost on the audience. The play was performed 115 times that season, giving it the longest initial run of any play in London since the original production of The Beggar's Opera. 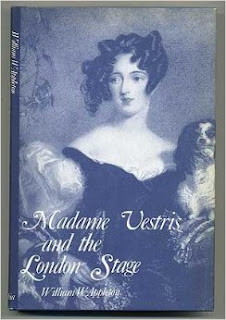 Gossipmongers endlessly speculated about which "Vestry-men" had made it into her bed. However, as William W. Appleton puts it in his biography Madame Vestris and the London Stage: "Her reputed stable of lovers would have taxed the energies of a full-time courtesan, let alone those of an extraordinarily busy actress." In fact, the letters of some of her admirers suggest that while she might have been a great flirt, she tended to hold off sexual relations, much to their frustration.

As interesting as her career as an actress was, Madame Vestris is known primarily for her role as a theatre manager. Certainly, women had managed theatres in Britain before, but none had been quite as prominent as Madame Vestris. In 1830, while she was working at the Tottenham Street Theatre, Charles Kemble, then the lessee of Covent Garden, brought suit against the minor theatre, arguing it had no license to perform "legitimate" drama. On December 6, the theatre announced it would have to close, and that same day, Madame Vestris rented another theatre, the Olympic, from John Scott for a thousand pounds a year.

As head of the her own theatre, she abolished benefit nights, which did not always function to an actor's benefit anyway, and hired the gifted comic actress Julia Glover. She also got rid of the long lists of people to receive free tickets, offering complimentary admission only to the press. Similarly, the Green Room became more exclusive, as she ushered out any outsiders who did not need to be there, which simultaneously made the theatre more respectable. 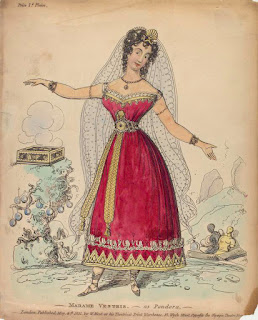 Acutely aware of the dangers of presenting "legitimate" serious dramas that might compete with the two patent houses at Covent Garden and Drury Lane, Madame Vestris produced elaborate light entertainments, many written and designed by James Planché. She played the central character of Pandora in Planché's Olympic Revels, which aimed to please but not intellectually challenge its audience.

In 1835, she hired for six pounds a week Charles James Mathews, the son of the famous comedian Charles Mathews. By the next year, there were already rumors they were sleeping with each other. He was only seven years younger than her, but the pairing turned heads. It was one thing for a man managing a theatre to have a relationship with a younger actress. For a woman manager to take up with a pretty-boy novice whose main claim to fame was his celebrity dad was another matter.

(However, some of the men spreading rumors were probably just jealous. Not yet 40, Madame was still recognized as having the best pair of legs in London.)

Though gossip persisted, the couple kept mum. Then, on July 18, 1838, a week before the company was scheduled to set sail on an American tour, the two were quietly married. The service was over and the two were out the door of the church before the public had a chance to come and gawk. Cruel commentators noted that recent productions at the Olympic had included You Can't Marry Your Grandmother and What Have I Done? It didn't matter. The couple was to enjoy a long, happy union, in spite of the naysayers.

The following year, the great actor William Macready announced he was giving up the management of Covent Garden. Madame Vestris, as she was still called, or Mrs. Mathews, which was her more proper legal name, jumped at the opportunity. She announced that she would be taking over the lease of one of the two inner sanctums of British high drama. Reassuring the public comic actors would not be usurping great tragic roles, she declared: "Mr. Mathews will not play Macbeth and I have positively refused Queen Katharine."

For her debut production at Covent Garden, she revived Shakespeare's Love's Labour's Lost, which had not been seen on stage since the days of the Bard himself. "I have done great things in a small theatre so you will not now find cause to complain that I have done small things in a great one," she announced before the curtain went up. She herself played Rosaline, the best female part in the play, but in spite of the production's ambitions, it did not please the audience.

Taking seriously Covent Garden's mission to provide high art, Madame Vestris produced Leigh Hunt's poetic drama A Legend of Florence, but it came off feeling like a watered-down version of Romeo and Juliet. She had better luck producing more of Planché's extravaganzas, like The Fortunate Isles and The Sleeping Beauty.

She still stuck to her ambitions of producing great Shakespearian comedy, first with The Merry Wives of Windsor and then with A Midsummer Night's Dream. The latter play had not been performed in its original form since the Puritans had closed the theatres in 1642. Instead, the Restoration era had transformed it into an opera. The landmark production she staged in 1840 marked an important milestone in the return on Shakespeare productions to the original texts.

An even bigger theatrical milestone came in 1841 with the production of Dion Boucicault's London Assurance. Though the play did not have the first box set in England (in fact, Madame Vestris had already given the public a rudimentary box set at the Olympic for the play The Conquering Game), the scenery was so magnificent it drew its own applause. Covent Garden was enjoying great artistic success, even though the high rent kept the company only just solvent.

Then, Charles Kemble struck again. The same man who had shut down the Tottenham Street Theatre when he was running Covent Garden decided he wanted his old theatre back. He maneuvered to get the proprietors to terminate the lease for a temporary shortfall of 600 pounds, allowing them to seize 14,000 pounds worth of properties Madame Vestris still had in the theatre.

After being thrown out of the theatre in which they had made their livelihood, Madame Vestris and her husband found themselves living hand to mouth. In 1847, facing competition from other great actors, "Mrs. Mathews" went on a farewell tour of the provinces. The farewell tour proved so lucrative, she was able to return to London with her husband and lease the Lyceum Theatre. So much for farewells!

At the Lyceum, they produced popular extravaganzas, but money troubles continued to plague them. In 1856, Madame Vestris died, and her husband made sure the funeral was solemn and private, much like their wedding. She was buried at Kensal Green, but her legacy lived on, in a London theatre scene that would be forever changed.
Posted by James Armstrong, Playwright at 9:32 AM