It's official! The Conservatory Theater Ensemble at Tam High School in Mill Valley, California will be putting on my short play with a long title The Mysteries of the Castle of the Monk of Falconara. 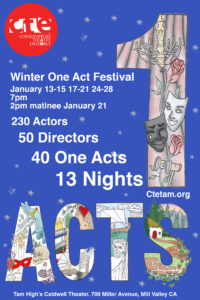 The play will go up next month as part of the organization's winter one-act festival. The piece is generally popular with student directors (and student audiences), so I hope they have a fun time with it.

Originally produced as a part of a Halloween festival, the play depicts three real-life writers of Gothic fiction: Horace Walpole, Ann Radcliffe, and Matthew G. Lewis. In real life, the three probably never met in person. In this play, however, all three of them are summoned to a mysterious Italian castle on the eve of All Hallow's... where much comedy ensues.

The play was published in the anthology The Best American Short Plays: 2005-2006, and so gets periodically performed, mainly by high schools and colleges. Ken Kaissar directed the original production more than ten years ago.

I will have some other events to announce soon, but I'm mentioning this one now because the production agreement got delivered to my apartment on Christmas Eve. It's always a great Christmas present to find out that a production is official!
Posted by James Armstrong, Playwright at 8:36 PM