Last night, I saw Allegiance, the new Broadway musical that tells the story of the Japanese internment camps during World War II. As the play shows, these camps sometimes split apart families, as some people resisted the government on principle, and others went off to fight in the Japanese-American 442nd Infantry Regiment of the U.S. Army. 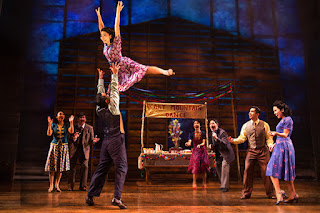 It's difficult for me to imagine someone having the U.S. government take away everything they have and force their entire family behind barbed wire, and then that person turning around and saying, "I love America so much I'm willing to fight for it." The men who did so both honor the American democratic system and perpetually shame it for its abominable failures. Much like the African-American regiments during World War II, the 442nd was composed of men fighting for a country that treated them as second-class citizens.

Allegiance honors such men, but it also recognizes the heroism of those who chose not to go. In the play, Sammy Kimura (played by Telly Leung) tries to enlist after Pearl Harbor, is rejected because he is Japanese, and then gets sent off to an internment camp in Wyoming. In spite of the barbaric (and blatantly unconstitutional) treatment of his family, he still longs to serve, and when the 442nd is created, he jumps at the chance to serve. Meanwhile, however, his father (played by Christopheren Nomura) refuses to swear allegiance to the U.S. government on principal, and is shipped off for even harsher treatment. Both men are stubborn in their own ways, but both earn our respect.

Perhaps even more interesting is the character of Frankie Suzuki (played by Michael K. Lee) who organizes resistance to the draft after the government decides to start forcing internees to join the military. Frankie and company have the best song in the show, "Paradise," which comments bitterly on government's assertions that the camps are safe, clean, and humane. The polar opposite of Frankie is Mike Masaoka (played by Greg Watanabe), the spokesman for the Japanese American Citizens League. Historically, Masaoka and the JACL cooperated with the government in hopes that the internment process would be as humane as possible. Understandably, Masaoka became the focus of a great deal of criticism, but Allegiance portrays him, too, trying to do the right thing as best he can. 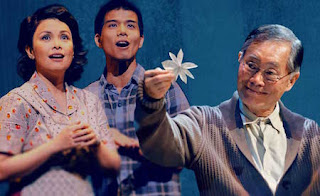 One of the show's two biggest stars is George Takei, who plays an older Sam Kimura, as well as that character's grandfather, Ojii-chan. The Star Trek actor, who was himself interned in the camps as a young boy, has been a major force in bringing the show to Broadway. The other big star is Lea Salonga, who plays Kei, Sammy's big sister who falls in love with the anti-authoritarian Frankie. Best known as the original Kim in Miss Saigon, Salonga has an amazing voice that composer Jay Kuo's music tries to highlight.

Sometimes the patriotic thing to do is fight, and sometimes it is to refuse. Allegiance makes us consider whether both sides might indeed be right. The play tells an important American story, and in a Broadway season already populated by other great shows like Hamilton and Spring Awakening, it deserves to be seen.
Posted by James Armstrong, Playwright at 8:13 AM