In the eighteenth and nineteenth centuries, fashionable upper-class families often staged plays in their own homes, using amateur, or sometimes a combination of amateur and professional actors.

Catherine Burroughs states in her book Closet Stages: "Private theatricals were often unabashedly elitist projects, not only in the sense that many took place in exclusive domestic environments, but because they required, in addition to time, a great deal of money to arrange." 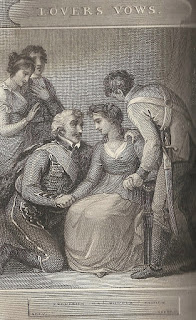 Jane Austin makes this clear in her novel Mansfield Park. While the conservative Sir Thomas Bertram is away, his household decides to stage a private theatrical in imitation of another great family, the Ravenshaws. The Bertrams and their circle are much more interested in the idea of putting on a play than in any particular play itself, but they ultimately decide on the same play as the Ravenshaws: Elizabeth Inchbald's Lovers' Vows, an adaptation of a play by August von Kotzebue.

Much of the excitement at Mansfield Park is over the mechanics of production, since clearly the play itself is secondary. The young people turn Sir Thomas's billiard room into a theatre, and take great care over hiring carpenters and purchasing green baize for a curtain. Most importantly, however, the play allows unmarried people the opportunity to rehearse love scenes with members of the opposite sex.

The shallow but pretty Mary Crawford plays Inchbald's plucky and quite forward character Amelia. The religious Edmund, though at first resistant to the idea of a theatrical, plays the poor clergyman Anhalt, whom Amelia maneuvers into marrying her, just as Mary is planning to do with Edmund.

Meanwhile, Mary's feckless brother Henry plays Frederick, the Romantic soldier in the play. This casting is suggested by Maria Bertram, who herself wants to play Frederick's mother Agatha, thus giving her a chance to rehearse with Henry. Young Henry, however, has been keeping up flirtations with both Maria and her younger sister Julia, who also makes a bid to play Agatha. Henry makes known his preference for Maria to play the part, which both settles the matter and sows the seeds for disaster later in the novel. Agatha, after all, is a fallen woman, and Maria is destined to play that very role later.

Though the unexpected arrival of Sir Thomas puts an end to the theatricals at Mansfield Park, much of the consternation of the more scrupulous characters centers on how private the play will actually be. Edmund only agrees to accept the part of Anhalt to prevent neighbors from being invited into the production, thus forcing Mary Crawford to act with a stranger and turning a private affair into a more generally public performance, with people from all over the surrounding region invited to participate and watch.

The elitism, then, of private theatricals was not only or even primarily bound by the exclusivity of the venue, since these events could be opened up to the entire neighborhood, as threatens to occur in Mansfield Park. Their elitism came more from the fact that they required leisure time for rehearsals and material wealth to supply a stage, props, and costumes.
Posted by James Armstrong, Playwright at 7:33 AM