Last night, I saw Theatre for a New Audience's production of Christopher Marlowe's Tamburlaine the Great. The production reduces each of the two parts of Tamburlaine (which was actually written as two separate plays) to about 90 minutes each. There is a half-hour intermission between the two parts. During that intermission, here are some things you will NOT be overhearing in the lobby:

"It's alright, but I wish the actors would get more emotional."

"Not as much killing as I expected. There's hardly been any blood."

"You know what Tamburlaine's problem was? Too timid. He should have just gone for it."

That 30-minute intermission seems to be less for the audience to take a break and more to give the stage hands time to clean up the gore from the first half. Not that there are severed tongues on stage at intermission, because the scene where a tongue is pulled out doesn't happen until the second half, but there's enough. To say that it rains blood in this production would in no way be inaccurate.

What makes the gore effective, however, is that the actors engage in symbolic bloodletting rather than trying to stage realistic-looking stabbings, impalements, and mass drownings. A man picks up a dagger and pours a goblet of blood on himself.  A child comes on with a bucket of blood and and a paint brush and gore is painted on someone.

In the second half, some of the deaths are a bit more realistic, but the production is never obsessed with fooling the eye. That's true for the cast doubling as well. Actors reappear as new characters without making noticeable changes in their appearance. The effect is to emphasize the repetition of Tamburlaine's conquests. To him, one king is very like another, and each new emperor he conquers could just as well have been the last emperor. 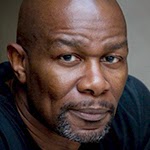 John Douglas Thompson played the eponymous conquerer with gusto. His death at the end became all the more effective, because it seemed impossible such a strong force of nature could be brought low by mere illness. His sudden sickness after burning the Koran in Babylon seemed both like divine justice and something spectacularly unfair. Death is the most natural thing in the world, but that Tamburlaine, the bringer of death to so many, should himself die, seemed almost unnatural.

Last year, I saw Thompson act the part of Prometheus in Red Bull's staged reading of Shelley's Prometheus Unbound. During the talkback, he spoke then about the raw power of Marlowe as opposed the the intricate complexity of Shelley. It was clear then that Thompson loved Marlowe, and this performance confirms that he is an ideal performer for the playwright's famous mighty line.

As for the historical Tamburlaine, also known as the Emir Timur, or Timur the Lame, the 14th-century conquerer tried to restore the empire of Genghis Khan, and nearly did. During his conquests, he killed about 17 million people, which would have been about 5 percent of the population of planet earth.

We don't see quite that many people killed in the production at Theatre for a New Audience, but it sometimes sure feels like it.

By the way, the production was recently extended to January 4th. If you want to see it, check out the theatre's website here:

Theatre for a New Audience

Posted by James Armstrong, Playwright at 7:59 AM