Whose Tragedy Is It?

The destruction of the Inca Empire had all of the elements of tragedy: overreaching ambition, a brilliant but flawed leader, and a magnificent downfall. Dramatists have repeatedly turned to the conquest of Peru when seeking inspiration for great tragedy. But whether they recognized it or not, before they ever set pen to paper, they always had to answer a simple question: Whose tragedy is it?

The End of Atau Wallpa, Richard Brinsley Sheridan's Pizarro, and Peter Shaffer's The Royal Hunt of the Sun each come up with a different answer to this question. As a result of the heroes they choose, they end up creating very different plays.

In all likelihood, the first tragic poets to have dealt with the fall of the Inca were Native Americans. Their work does not come to us directly in written form. Still, numerous "Dances of the Conquest" have come down through the oral tradition. These no doubt changed over the years, and by the time they were written down and translated into Western languages, they might have become unrecognizable when compared with early indigenous dramas.

In spite of these questions of authenticity, the Bolivian play The End of Atau Wallpa provides a convenient example of what the first tragedies on the conquest of Peru might have looked like. The Spanish version that we have from Jesús Lara dates to the mid-twentieth century, but it conveys how Native Americans in the sixteenth century likely viewed the fall of the Inca. 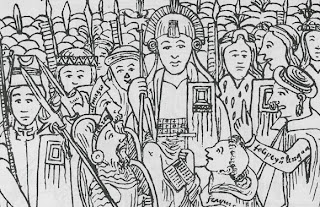 The Inca Emperor Atahualpa, or Atau Wallpa, begins the play with a literary device common in tragedy, a prescient dream of ill fortune.

"I saw the Sun, our purifying Father, hidden in thick black smoke," he says, "Maybe death is hovering near."

This typical tragic speech is reminiscent of Cassandra's cry to another sun god in Aeschylus's Agamemnon: "Apollo, Apollo! Leader of Journeys, my destroyer! Where have you led me? Oh! what fearful house is this?"

But while Cassandra is prophesying a tragedy in which she is only a secondary actor, Atau Wallpa remains firmly at the center of his own tragedy. Having deposed his brother, Inca Husácar, he must face a new conqueror. Ultimately, Atau Wallpa must bend before Francisco Pizarro, just as he once made others bend before his will. Like King Lear, who after being stripped of his powers literally strips himself on the heath, Atau Wallpa hands over all the symbols of his authority, including his golden headpiece, mace, and sling.

After a long lament, Atau Wallpa is slain by the base conquistador Pizarro. If it is not already clear that Atau Wallpa is the tragic hero, the King of Spain makes it explicit, lambasting Pizarro and praising his fallen enemy. While the memory of Atau Wallpa lives on, Pizarro dies and his body is cast on a fire. By the king's orders, nothing is to remain of the "infamous soldier."

The End of Atau Wallpa is a simple enough tragedy. The hero is a king, the stakes involve the fate of nations, and the action follows a tremendous reversal of fortune. When the German Romantic dramatist August von Kotzebue tackled the same material, he shifted the focus away from the king and made the noble Inca Rolla his hero. In both Kotzebue's play Die Spanier in Peru, and in Sheridan's English adaptation of it, Pizarro, this shift in heroes accompanies an overall change in aesthetic from a classical notion of tragedy to a more Romantic ideal in which individuals of exalted spirit are more important than kings or empires. 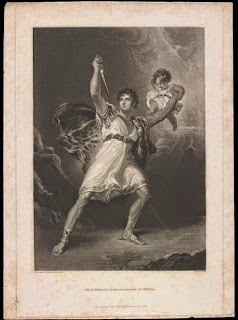 Rolla's entrance in Pizarro quite literally identifies him as a hero, as Alonzo cries out before Rolla comes on stage: "'Tis Rolla comes, the first and best of heroes."

This hero enters accompanied by trumpets, and in the next scene he is embraced by the Emperor. It is Rolla who wins the battle against the Spanish, and Rolla who undertakes the rescue of Alonzo.

The rescue of this single man, rather than the fate of an army or an empire, occupies the heart of the play, another indication that Pizarro is a Romantic rather than classical tragedy.

The machinations of Kotzebue's plot sometimes tip the play into melodrama, yet Rolla remains a dignified tragic hero. Even the ruthless Pizarro is moved by Rolla's nobility of spirit.

In his adaptation, Sheridan grants Rolla the elevated and stoic language of a tragic hero, giving him such poetic lines as, "To triumph o'er ourselves, is the only conquest." As a result, when Rolla dies, the effect is tragic, not merely evoking the pathos of melodrama.

Both Rolla and Pizarro die in the end, but it is Rolla's body that is lamented while Pizarro’s corpse is carried off in infamy. In that respect, the finale is similar to that of The End of Atau Wallpa, but in Atau Wallpa characters lament a king and fallen civilization, whereas in Pizarro they lament one man.

The fate of the Inca Empire is almost irrelevant in Sheridan's play. The Spanish are vanquished for the time being, but history dictates that the Inca will not last long. Sheridan does not invite us to contemplate this fact, however, instead emphasizing the tribute paid to Rolla's memory. Atau Wallpa is a lament for a nation, while Pizarro laments a single individual.

In a post-Romantic era, audiences are less inclined to elevate one person over the fate of a civilization. They are also unlikely to believe in the soaring (sometimes unbelievable) goodness of a character like Rolla, or to be moved by the fall of a dynastic monarchy so remote from modern democracy. To engage a twentieth century audience, Peter Schaffer undertook something very different from either Atau Wallpa or Pizarro: He took the man who had been the villain of the story and made him the tragic hero of The Royal Hunt of the Sun. 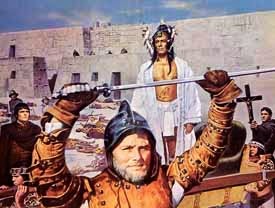 Little is known about the historical Francisco Pizarro. All dramatizations of the conquest, however, seem to latch onto one fact about the conquistador — his infamous low birth.

Both Atau Wallpa and Pizarro use the general's humble origins as a way of denigrating him and perhaps explaining why he behaves as such a philistine in the face of the civilized Inca. Writing in a more democratic age, however, Shaffer uses Pizarro's lowborn status as a way to appeal to the audience's sympathies.

Instead of covering up his background, Shaffer has Pizarro revel in it, indulging in the baseness of his past. His first line is, "I was suckled by a sow." Later on he declares, "I learnt my trade as a mercenary, going with who best paid me." He professes himself illiterate and completely lacking in chivalry, but his boastfulness in his lowliness comes, he tells us, from the world constantly saying "No" to him. Now that he is able to, he will take what the world refused to give him.

This is not the language of a villain, but rather of an anti-hero. Shaffer's Pizarro has more in common with the protagonists of Christopher Marlowe than with the evil conquistador he is portrayed as in Atau Wallpa and Pizarro.

What makes The Royal Hunt of the Sun truly extraordinary, however, is the way Shaffer transforms this anti-hero into a legitimate tragic hero, a man who over-reaches, but in the quest for something more than simple self-aggrandizement. Shaffer's Pizarro embarks on a quest for literal gold, but in his encounters with the Inca, he begins to hunger for a spiritual gold. His royal hunt becomes no longer for an earthly sun-like substance, but for the Sun itself, and all the spiritual qualities with which mythology endows the Sun.

As Pizarro and the Inca Emperor Atahuallpa march towards one another in Act I, both claim to be gods, but Atahuallpa actually believes in his godhead, while Pizarro cynically uses the idea of godhood in his game of conquest. Pizarro seems to believe in no god, Inca or Christian, any more than he believes in chivalry or honor. The only thing he does seem to believe in is death, which he views with the cold eyes of realism, draining death of the romantic notions that elevate Rolla's fall in Sheridan's play.

In fact, Pizarro's idea of death seems antithetical to the existence of tragedy at all. "Does anyone ever die for anything?" he asks, adding, "I thought so once. Life was fierce with feeling." In order to become a tragic figure, Pizarro must first get that feeling back. Only then can his death possibly have any meaning.

The feeling Pizarro finally does recapture in Act II comes not from Christianity, but from the Inca religion. In Equus, Shaffer would later probe more fully the appeal of Paganism to the alienated modern world, but in The Royal Hunt of the Sun, he is more interested in Paganism's appeal to one man, a man he will ultimately elevate to being a tragic hero.

The Christians are nominally coming to convert the Inca, but it is Atahuallpa who instead Inca-izes Pizarro. When Atahuallpa gives him an Inca earring, Pizarro, seeing his reflection in a knife, declares, "I have never seemed so distinguished to myself." Atahuallpa teaches Pizarro how to dance and how to laugh. When Pizarro's soldiers demand that he kill Atahuallpa, the man who once believed in nothing but death finds he cannot give the order.

Atahuallpa gives Pizarro a way out. Since he is a god, he cannot die, and if they strike him down, he will only be resurrected. This Pagan belief finally gives Pizarro faith, and even if it is a false faith, it is at least something in which he can believe. At last, Pizarro has something to die for.

After the Spanish execute Atahuallpa, Pizarro waits for his resurrection. When the Inca does not rise, Pizarro feels his faith has been betrayed. Yet for once he has felt faith. For the first time, Pizarro begins to cry, something the villains of Atau Wallpa and Sheridan's drama could never do.

It might seem odd that Kotzebue and Sheridan, living in what we perceive as a less enlightened age, should choose a Native American hero, while Shaffer, in the comparatively progressive 1960s, chose to elevate a conquistador, the very symbol of everything wrong with Western imperialism. However, Rolla manifests a euro-centric myth of the noble savage. He might be Inca in name, but in reality he personifies Western Romantic ideals. Shaffer’s Pizarro, though a Westerner, attempts to grasp a non-Western ideal.

It is easy to criticize Shaffer for falling prey to exoticism and for projecting onto Inca society that which he sees lacking in his own, but in spite of that, The Royal Hunt of the Sun remains a braver play than either Atau Wallpa or Pizarro. By focusing on the least likely tragic hero, Shaffer makes tragedy possible in an age notoriously hostile to tragic sensibilities.

The Royal Hunt of the Sun is neither a classical nor a Romantic tragedy. Instead, it is a modern tragedy which glories in the banality and senselessness of death, but at the same time reaches beyond that to transcend a world that no longer believes in the possibility of transcendence.