In his 1757 book A Philosophical Enquiry into the Origin of our Ideas of the Sublime and Beautiful, Edmund Burke wrote not only about painting, poetry, and our direct response to nature, but also about an audience's response to tragedy. This is hardly surprising, given the high regard with which the eighteenth century regarded tragic drama. Much of Burke's analysis is derivative of Aristotle, who wrote of a catharsis "through pity and fear" in a manner similar to that which Burke would use to describe the sublime. Burke's observations on tragedy are interesting, however, since they show how someone in mid-eighteenth-century Britain viewed the production of new tragedies for the stage.

Burke's modifications of Aristotle, including his theories with regard to astonishment, are stated in absolute terms, but they particularly apply to British tragedies written during his own lifetime. In fact, John Home's tragedy Douglas, which first played at Covent Garden the very same year Burke published his philosophical speculations, embodies the tragic ideals described in Burke's landmark work.

One stumbling block for interpreters of Aristotle has always been explaining how watching an incestuous patricidal tyrant decide to tear his eyes out is something that should be enjoyable. As Burke states the problem, "objects which in reality would shock, are in tragical, and such like representations, the source of a very high species of pleasure." He deftly navigates these waters by observing: "terror is a passion which always produces delight when it does not press too close." Provided we are able to watch from a safe distance, there is no horror too great or fantastical for our rapt observation. In fact, Burke postulates that, "there is no spectacle we so eagerly pursue, as that of some uncommon and grievous calamity."

While Aristotle sees value in the purgation of terrifying emotions, Burke views our safe observation of terrors as good in and of itself. That which excites "the ideas of pain, and danger" is what Burke calls "the sublime" and "is productive of the strongest emotion which the mind is capable of feeling." Even if tragedy does not make us feel precisely good, it makes us feel more fully human. In order to feel the strongest emotion possible, we must experience the sublime, a quality Burke associates closely with nature. According to Burke, the highest passion aroused by the sublime is astonishment, which he calls "that state of the soul in which all its motions are suspended with some degree of horror." 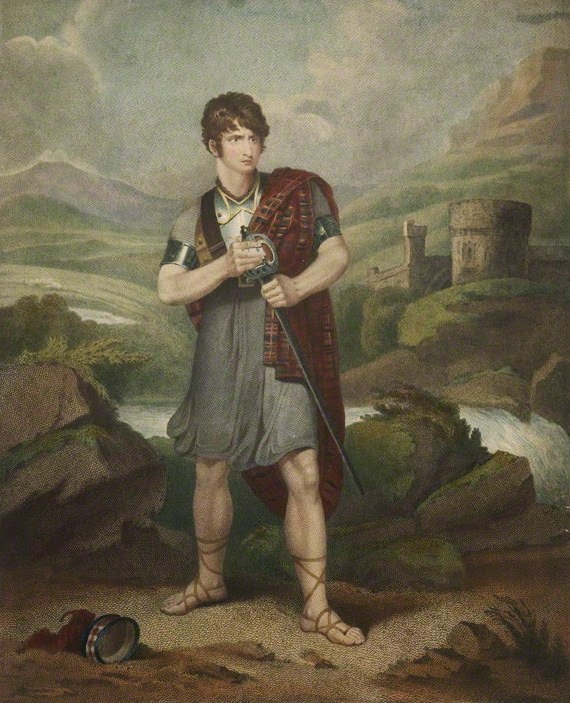 This discussion of astonishment brings us to Douglas, a play on the cutting edge of public taste in tragedy during Burke's time. Rejected by David Garrick for Drury Lane, Douglas received a trial run in Edinburgh in 1756, leading to the play's London debut the following year.

The presence of nature is felt from the very first scene, which according to the stage directions takes place in "The court of a castle surrounded with woods." Even if those woods are not immediately visible onstage, the natural world is constantly encroaching on the court in the person of Norval, the peasant-raised hero. Norval's famous speech in Act II celebrates the natural environment, citing the "Grampian hills," "frugal swain," and "flocks and herds" that once surrounded the hero.  To complete the play's movement in the direction of the natural world, the final act takes place in the woods themselves.

Home uses this last act to create the feeling of astonishment Burke describes in his treatise. Burke's description of how "motions are suspended with some degree of horror" finds an almost literal manifestation in the play's description of Lady Randolph perched on the edge of a precipice. Suspended between life and death, Home's heroine gazes with horror down into the abyss. The scene recalls Burke's chapter on vastness in Part II, in which he claims "height is less grand than depth; and that we are more struck at looking down from a precipice, than at looking up at an object of equal height." Contemplating both the depth of the natural landscape and the depth of her own despair, Lady Randolph no doubt feels a sensation of astonishment--and is the cause of astonishment in the audience.

Home describes Lady Randolph as standing "Upon the brink," looking "Down on the deep," and then gazing up with "her white hands to heaven." Before her plunge, she is literally suspended between the heavens and the abyss. Though this bodily manifestation of astonishment occurs offstage, it appears in the audience's imagination. The sublime image of the precipice could not be realized onstage with the technologies available in the 1750s (though later eras would attempt such feats with spectacular scenic designs). Still, Home successfully painted a portrait of astonishment, and in a way that closely paralleled the graphic description of this feeling as Burke had penned it at nearly the identical time.