Cherríe Moraga begins the printed version of her play The Hungry Woman: A Mexican Medea with a quote from the German feminist Christa Wolf:

Where can I go?
is it possible to imagine a world,
a time, where I would have a place?
There’s no one to ask.
That’s my answer.

The Hungry Woman takes place in the future, after the failure of a utopian state known as Aztlán that was supposed to create a homeland for people of indigenous ancestry living in the southwestern United States and northern Mexico. In her notes for the program, Moraga states that “Rebels scorned the ballot box” and that after the revolution individuals without native blood were “permitted to reside” in the new country, but the right to hold land was generally reserved for people who could certify they had native ancestry. Those who were not ethnically native in this non-democratic state were essentially second-class citizens, permitted to live (at least for now) within the borders of the native homeland.

Substitute “German” for “native” in this scenario, and the supposedly utopian state of Aztlán begins to sound an awful lot like the Third Reich. Though Moraga is sympathetic toward her fictional revolution, she makes the parallels between Aztlán and Nazi Germany fairly explicit. The character of Chac-Mool is also named Adolfo, a clear reference to Adolf Hitler, and in a conversation with a Border Guard, Chac-Mool claims, “I was born to be a Nazi, to have a Nazi life.” The fascist turns both he and the nation take in the play are inherent from the beginning. When a revolution is founded on an inborn ethnic link to the land--or “blood and soil” as the Nazis put it--how can anything go right?

What Moraga seems to be expressing is an inability to dream, an inability to even imagine a better world. Like Christa Wolf, she sees no political movement of the past that has been able to create a place for people like her. There is no one to ask how something could be done, so the implied conclusion is that nothing can be done. Women like Moraga’s Medea are condemned to always dwell on the borders, never truly finding a place for themselves. A world where they might find happiness cannot even be imagined.

This inability to dream, an inability to even imagine a better world, also haunts Nilo Cruz’s new play Sotto Voce, which closed recently at Theater for the New City. The character of Bermadette, though a famous novelist, is unable to write about the fate of her former lover Ariel who failed to escape from Germany on the eve of World War II and was in all likelihood murdered during the Holocaust.

Bermadette, it seems, needs to tell Ariel’s story, to imagine him on the ship leaving Germany, and to perhaps dream of what his life might have been like had he escaped. Paralyzed with guilt and regret, she walls herself up in her Manhattan apartment, unable to leave, and also unable to write anything new. She knows that Ariel is almost certainly dead and that there are no other reasonable possibilities, so she cannot even fantasize about his possible life. Yet this inability to dream prevents her from living her own life as well.

Cruz offers a way out for Bermadette by introducing the character of Saquiel, a young Cuban writer trying to get the governments of the U.S. and Cuba to apologize for not taking in refugees from the S.S. St. Louis, the ship that carried Ariel back in 1939. Anyone with even an elementary knowledge of politics must know that getting the governments of the United States and Cuba to issue a joint apology for anything is nothing other than a dream, but at least Saquiel has a dream. He relentlessly stalks Bermadette, calling, sending her electronic messages, and even standing outside her apartment building. Gradually, Bermadette warms to the young man. She even takes to calling him “Ariel.” Through Saquiel, Bermadette is able to enter an imaginative space where Ariel did in fact live.

For a writer like Moraga or Wolf, the creation of such an imaginary world might seem pointless and escapist. In Cruz’s play, however, it is Bermadette’s salvation. By remembering Ariel again and imagining him alive, she is presumably able to break through her writer’s block, which has yielded only pages and pages that she has thrown away as trash. She is also able to enjoy life again and venture beyond the confines of her apartment. The final image Cruz leaves us with is Bermadette dreaming of Ariel (played by the same actor as Saquiel) sailing off into a dreaming sunset—a happy ending that never was but that is necessary for her own psyche. 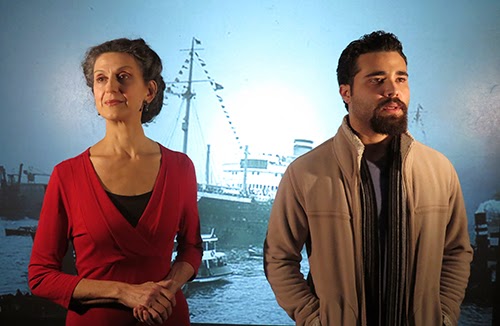