Georgia Cayvan on the Stage and Its Women 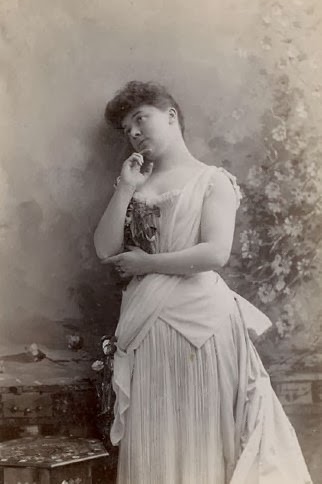 In 1893, the American actress Georgia Cayvan gave an address at the Chicago World's Fair entitled "The Stage and Its Women." In it, she defended the drama as a moralizing force. Far from the den of iniquity some critics saw, Cayvan viewed theatre as a tool to civilize humanity precisely because it gave audiences a chance to relax and enjoy themselves. Cayvan states:

The terrible tension of stimulation, the restlessness and lack of repose which has come upon the American people through our rapid growth and formation as a nation, our intensity of interest and concentration of desire for the best of life, amounts to a disease which physicians call "Americanitis," and which makes essential a form of recreation which shall satisfy in the majority the intellectual craving at small expense of mental effort. Such recreation the stage supplies.

According to Cayvan, the goal of theatre was to take tired men and women and lift them, for a brief time, out of the "rush and struggle" so they could forget the difficulties of their lives. The "glamour and romance" of the stage brought restfulness, she argued, precisely because drama could portray a world without moral complication. Since "everything comes out all right in the last act" theatre artists could uplift their audiences, taking on the roles of "preachers and teachers and reformers."

Popular literature could perform a similar function, but Cayvan claimed the theatre was uniquely positioned to aid individuals who were too tired or indifferent to read. These included "the bitter, world-worn, pessimistic men and women" who were most in danger of falling into immorality. Drama, Cayvan maintained, was the perfect way to reach such people. Her speech proceeds: 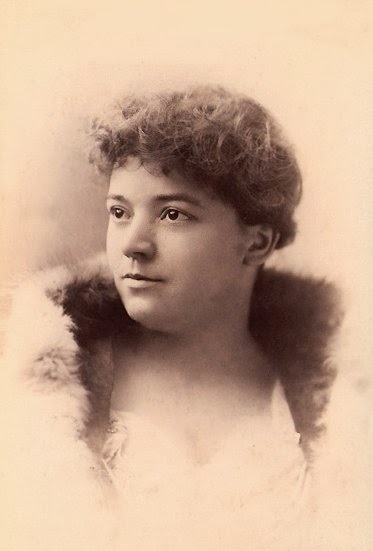 We speak to them in a language they understand; we appeal to their better natures by presenting pictures of true nobility of character, by making our villains more unfortunate and repulsive than the genuine article, and by always seeing to it that the hero marries a rich heiress, that the wronged wife is recompensed, and the betrayer of innocence is punished.

Progressive women in particular should embrace the stage, Cayvan said, because the dramatic profession had been a pioneer in granting rights and privileges women had been deprived of elsewhere. The theatre was the first profession to recompense women with the same "fame and fortune commanded by men."

Of course, most American actresses of the nineteenth century were actually underpaid in comparison to their male counterparts, but in her defense of the theatre, Cayvan decided to skirt over this issue. She instead held up actresses as a model for women trying to break into other professions.

Her defense of her calling became quite passionate:

The women of the stage what will you do with them? What is your duty toward them? You cultivate your flowers for the delight they give you; do not step on them because they yield no useful fruit.... I would make my plea for a better understanding, a more sympathetic appreciation of the women of the stage. I would present to you something of what the dramatic profession demands of women particularly here in America, where conditions prevail which are not to be found in any other country that, with the wise tolerance that knowledge and understanding always establish, you may learn to regard us not as curious creatures to be looked down upon in Pharisaical pity, or goddesses to be looked up to with sentimental heroine-worship, but simply as women of the same family, speaking a different language, governed by different standards, yet in spite of tradition and environment maintaining an integrity of principle which has given to the profession such womanly women as my colleagues of today.... 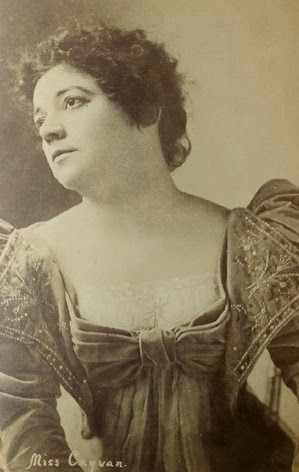 For Cayvan, the chief obstacle for actresses of her own time was the impertinence of the press, which was always sticking its nose into the private life of performers. Cayvan knew about this sort of thing first-hand. In fact, she would later demand (and receive!) a public apology for defamation of character after her name was insinuatingly brought up in the divorce case of a man who was merely a casual acquaintance.

Cayvan criticized the "insatiable curiosity concerning the smallest details" of an actress's private life. Though performers were accused of seeking notoriety, she said it was notoriety that sought performers. She particularly bristled when newspapers asked trivial questions about how she sewed and whether or not she was afraid of mice. She urged them to instead ask questions relevant to the creation of dramatic art.

The speech also railed against the red-carpet traditions of the day, which put more emphasis on actresses' gowns than on the artists wearing them:

The price of perpetual daintiness on the stage is eternal vigilance and expense, and the cost of modish gowns, which can be worn but a season and require the skill of the fashionable dressmaker instead of the stage costumer in construction, taxes heavily the resources of small-salaried players.

And of course Americans were chastised for praising physical beauty in actresses above all else:

...in this country alone, I am sorry to say, a woman's art-life on the stage is comparatively short, for old age seldom brings honor, because of the public's constant craving after the new and the pretty at the expense of art; and yet no art can be worthy unless it is matured.