The Visual Life of Romantic Theatre

Yesterday, I tuned in for a very informative online panel on "The Visual Life of Romantic Theatre" which previewed some of the work that will be published in a forthcoming book offered by University of Michigan Press.
Diane Piccitto and Terry F. Robinson hosted the event, which began with with a fascinating talk by Susan Brown on the diary of Mary Rein, who oversaw the design and construction of costumes at Drury Lane beginning in the late 18th century. While we don't have any of her own sketches of costumes, we do have images of costumes she designed and constructed with the help of the theatre's wardrobe staff.
One thing I found fascinating was that even though performers were generally expected to supply their own costumes, many of the dresses Rein recorded making were for the leading ladies of the stage. In one case, she provided a dress for the star actress Dorothy Jordan for her "personal use" though the outfit might also have been worn on stage as well. Though scenery costs far eclipsed theatre expenditures on costumes, Brown argued that clothing was an important part of Romantic spectacle.
Next, Uri Erman spoke on the Italian singer Angelica Catalani, who was rumored to be mistress to the controversial politician Lord Castlereagh. Erman showed a cartoon by James Gilray entitled "Delicious Dreams!" The image, which dates from 1808, shows a cat (-alani) whispering into Castlereagh's ear. Foreign opera singers like Catalani became a target for xenophobic forces. They also were used by those who opposed the encroachment of opera into London's patent theatres, replacing the castrati, which had previously been used as images of operatic monstrosity, but by the 19th century had fallen out of favor. 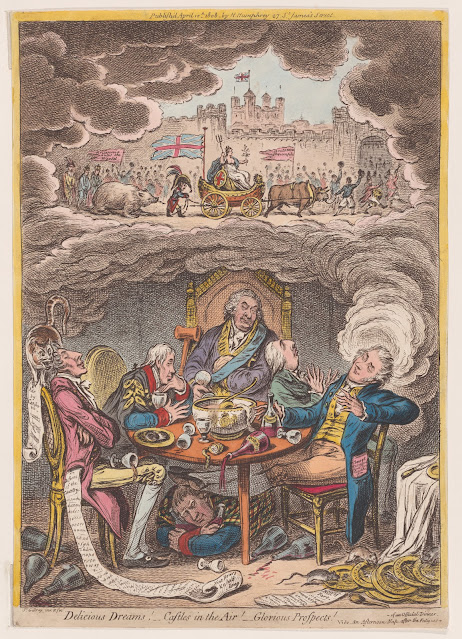 I was particularly excited to hear Danny O'Quinn discuss the Romantic toy theatre. Though toy theatre production increased during the Victorian period, he said it was essentially a Regency art form. O'Quinn discussed William Webb's toy theatre version of Aladdin, which showed several Aladdins in different positions, so they could be switched in and out during the performance. This, he said, made changes in character indistinguishable from the changes in physical objects frequently used in pantomime. O'Quinn also mentioned that screens were sometimes used by toy theatre performers to hide the operators and make the performance all the more dramatic.
Deven Parker spoke about a play that was frequently adapted to the toy theatre, Isaac Pocock's The Miller and His Men. She noted that play texts could serve to mediate live performances, helping the reader to visualize what would otherwise be seen on stage. Even the use of punctuation--such as dashes--can help convey to the reader what the visual experience of watching a play is like.
Last to speak was Dana Van Kooy, who discussed Obi; or, Three-Fingered Jack, a play by John Fawcett about the Jamaican folk-hero Jack Mansong. The piece premiered at the Haymarket Theatre in 1800 with Charles Kemble as Mansong, and Maria De Camp as Rosa, the plantation owner's daughter.
It was a great panel, so I'm glad I tuned in for it!
Posted by James Armstrong, Playwright at 8:59 AM