On October 6th, 1814, the actress Eliza O'Neill made her London debut at the Theatre Royal, Covent Garden. She played the role of Juliet in Shakespeare's Romeo and Juliet, and for years afterward, the night would not be forgotten.

One contemporary said of her that "for grace, sweetness, delicacy, and refinement, she was unequalled." The painter Sir Thomas Lawrence marveled at how natural O'Neill's acting was, comparing her (as many people did) to Sarah Siddons, who had retired from the stage by that time.

Born in 1791 into a theatrical family, O'Neill allegedly made her first stage appearance being carried onstage in her father's arms. The family performed for years in her native Ireland, going back and forth between the Drogheda and Dundalk Theatres. These were decidedly small affairs, so she was quite fortunate to be spotted by a talent scout and invited to perform in Belfast.

O'Neill insisted that her entire family join her in Belfast, so her father, three brothers, sister, and a sister-in-law were all given engagements at the new theatre. It was O'Neill, however, who was undoubtedly the star, and the newspapers in Belfast were extremely favorable in their revues. After two years, the whole family moved to Dublin, where a dispute between a theatre manager and a star actress led to O'Neill getting an opportunity to appear as Juliet at the Crow Street Theatre.

After her successful appearance as Juliet, the manager of the theatre offered her a contract, agreeing to take on her father and brother as well. It was in Dublin that John Philip Kemble first spied the actress. "She has great talent and some genius," was Kemble's assessment. He offered her an engagement in London. Again, O'Neill asked that she be able to take her family with her. Kemble refused to employ them, but did agree to allow her brother Robert to accompany her as a personal protector and to have access to the theatre's green room.

And so it was that O'Neill was finally able to bring her celebrated Juliet to London. The actor William Charles Macready, recalling O'Neill's debut, hailed her "beauty, simplicity, and grace," as well as her "native elegance" and "feminine sweetness." Others commented on how as Juliet her character blossomed after she fell in love, and then fell into a heart-breaking despair. If she was ever perceived in a negative light, it was because audiences found her too boisterous and vehement for an era that still extolled classicism.

In fact, O'Neill helped to usher in a new era of Romantic acting. That January, Edmund Kean had made his debut at Drury Lane, and audiences were looking for a more emotional approach to the stage than had been taken by the previous generation. O'Neill obliged them, at least until 1819. That was when she left the stage to marry William Wrixon Becher, Esq., who soon after the marriage became a baronet. Thus, the once impoverished actress ended her life as Lady Becher.

Many theatre fans no doubt wished she had continued on the stage, but the former actress seemed happy in her retirement. She and her husband raised a family in Ireland, and she ended up living to the ripe age of 81. In any case, the revolution in acting she helped to bring about continued, and performers throughout the rest of the nineteenth century tended to adopt her emotion-filled style. 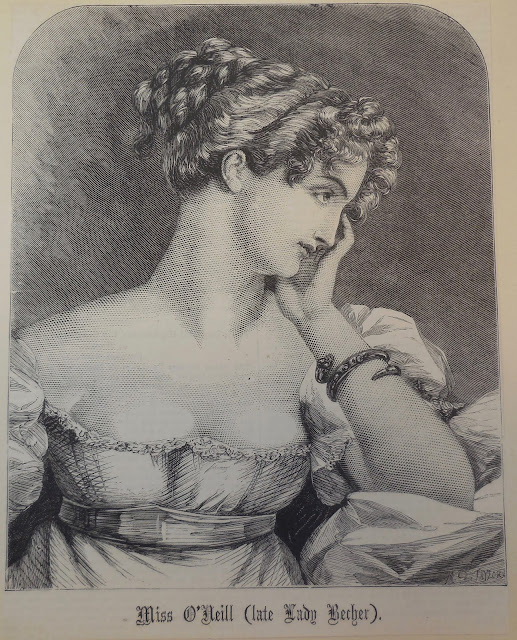