I've written before about the two texts of King Lear, but as complicated as the editorial tradition is for that play, the text of Shakespeare's Hamlet is even more problematic. We have not two but three authoritative texts of Hamlet from the 17th century.

No one knows for sure when Hamlet was first performed. There is a note about the play in the Stationers' Register in July of 1602, stating it was "lately acted by the Lord Chamberlain his servants." However, the poet Thomas Nashe wrote in 1589 about a play called Hamlet, and the Admiral's Men did a production of a play of that name in 1594. Was that's Shakespeare's play?

Unlikely. Shakespeare doesn't appear to have written any plays as early as 1589, and he wasn't particularly associated with the Admiral's Men. Nashe, in the same passage mentioning Hamlet, also alluded to Thomas Kyd, the author of The Spanish Tragedy, so perhaps Kyd wrote an earlier version of the story, and then Shakespeare created his "reboot" later. We'll probably never know for sure.

In the first decade of the 17th century, though, Shakespeare's Hamlet seems to have been very popular, even being performed by crews on ocean-going ships to entertain themselves. In fact, the first documented performance of what we can be sure was Shakespeare's Hamlet was on board the Red Dragon, a ship then off the coast of present-day Sierra Leone. That's right. The first fully documented production of the greatest play in English was actually in Africa. 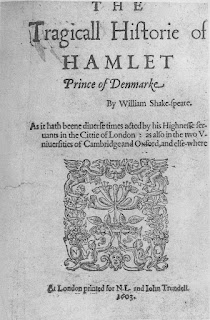 What text did they perform? Well, at the time, there were two different versions of Shakespeare's Hamlet issued in affordable quarto editions. The First Quarto, issued in 1603, is sometimes referred to as the "Bad" Quarto, because it departs both from the subsequent quarto editions and the First Folio edition issued by Shakespeare's actors after he died. The sections involving Marcellus, Voltemand, and Lucianus (the poisoner in the play-within-a-play) are substantially the same, leading some critics to believe that the First Quarto was sold to the printer by a hired actor who had played those three roles.

On the other hand, the so-called "Bad" Quarto could just be an earlier version of the script. In any case, it's vastly shorter and more simplified than the other texts we have. Consider the First Quarto's version of the "To be or not to be" speech:

To be, or not to be, I there's the point,
To Die, to sleepe, is that all? I all:
No, to sleepe, to dreame, I mary there it goes,
For in that dreame of death, when wee awake,
And borne before an euerlasting Iudge,
From whence no passenger euer retur'nd,
The vndiscouered country, at whose sight
The happy smile, and the accursed damn'd.
But for this, the ioyfull hope of this,
Whol'd beare the scornes and flattery of the world,
Scorned by the right rich, the rich curssed of the poore?
The widow being oppressed, the orphan wrong'd,
The taste of hunger, or a tirants raigne,
And thousand more calamities besides,
To grunt and sweate vnder this weary life,
When that he may his full Quietus make,
With a bare bodkin, who would this indure,
But for a hope of something after death?
Which pusles the braine, and doth confound the sence,
Which makes vs rather beare those euilles we haue,
Than flie to others that we know not of.
I that, O this conscience makes cowardes of vs all,
Lady in thy orizons, be all my sinnes remembred.

The gist of the speech is the same as the one we all memorized in high school, but, oh, the differences! 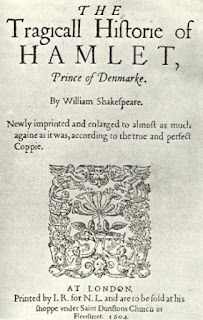 It's also noticeably shorter. When a second quarto edition was issued the following year, the cover page claimed it was "Newly imprinted and enlarged to almost as much againe as it was, according to the true and perfect Coppie." Yup. The Second Quarto is nearly twice as long as the previous printing. Unlike the previous edition, it also does not seem to have been a performance text. The Second Quarto is considerably longer that the "two hours' traffic" it typically took to perform an Elizabethan play.

So what exactly is the Second Quarto? Perhaps Shakespeare was particularly fond of the piece, and wrote more than he needed, so in performance the company could choose to perform or not perform different sections. For instance, Hamlet seems to have been written shortly after Julius Caesar.  The play has numerous allusions to Caesar, including this speech spoken by Horatio in the Second Quarto:

A moth it is to trouble the mindes eye:
In the most high and palmy state of Rome,
A little ere the mightiest Iulius fell
The graues stood tennatlesse, and the sheeted dead
Did squeake and gibber in the Roman streets
As starres with traines of fier, and dewes of blood
Disasters in the sunne; and the moist starre,
Vpon whose influence Neptunes Empier stands,
Was sicke almost to doomesday with eclipse.
And euen the like precurse of feare euents
As harbindgers preceading still the fates
And prologue to the Omen comming on
Haue heauen and earth together demonstrated
Vnto our Climatures and countrymen.

That passage doesn't appear in the First Folio compiled by Shakespeare's actors in 1623. By that time, Julius Caesar was not as fresh in people's memories, and the company had probably dropped the passage in performance.

Yet the First Folio has other passages not found even in the expanded Second Quarto. It, too, is probably not a performance text, but likely a revision of the play Shakespeare did later in his career, rewriting various passages and providing optional scenes that could be played or not depending on the context of the performance.

For example, the long sequence in Act II alluding to the so-called War of the Theatres appears only in the First Folio, and not in the early quarto printings. After the players arrive, Rosencrantz explains:

Nay, their indeauour keepes in the wonted pace; But there is Sir an ayrie of Children, little Yases, that crye out on the top of question; and are most tyrannically clap't for't: these are now the fashion, and so be-ratled the common Stages (so they call them) that many wearing Rapiers, are affraide of Goose-quils, and dare scarse come thither.

This is a reference to the popularity of children's companies that were in vogue for a while and had contributed to a number of quarrels writers waged both in print and in play texts. It would have gotten a lot of attention during times when the children's companies thrived, but might have been cut when the public's interest in child performers waned.

So which text should we perform today? Editors generally compile them together to give directors a choice of which passages to include and which to leave unsaid. In a sense, they are doing the same thing Shakespeare himself probably did, when he offered texts to his company considerably longer than the daylight hours they had available to perform. Hamlet offers us an embarrassment of riches. How much (or little) we wish to perform is up to us. 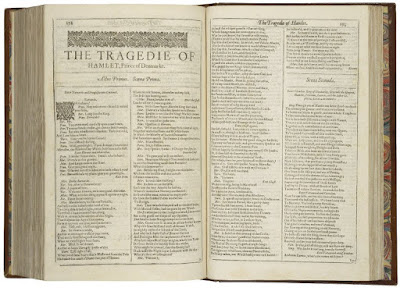 Posted by James Armstrong, Playwright at 11:18 AM