This summer, the Public Theater will be performing King Lear in the outdoors Delacorte Theater in Central Park. I'm very excited about this, though also a bit concerned. The Public has a tendency to perform Shakespeare relatively uncut, perhaps out of a misguided sense that it is being more faithful to the original. For the most part, performing "uncut" Shakespeare is being incredibly un-faithful to the plays. After all, Shakespeare's company never performed his plays that way. A close examination of King Lear pretty much proves it. 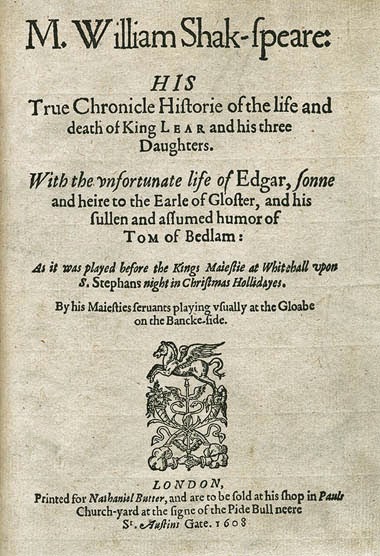 What you have to understand is that there is not just one King Lear. Rather, the play comes down to us in two very distinct versions. The oldest text we have is a 1608 quarto of a play entitled: True Chronicle Historie of the life and death of King Lear and his three Daughters. A second quarto came out in 1619 with substantially the same text but with a few corrections. When John Heminges and Henry Condell, two actors in Shakespeare's company, came out with a folio edition of the playwright's works in 1623, they published a very different text under a different title: The Tragedie of King Lear, which is listed in the table of contents simply as King Lear.

So why are there two substantially different versions? The most likely reason is that they come from two different performance texts. The quarto states that it is the play "As it was played before the Kings Maiestie at Whitehall," a royal palace, but that it was performed "By his Maiesties seruants vsually at the Gloabe." Was the exact same play performed at court and at the Globe? Possibly, but King James had a notoriously short attention span, and bits might have been left out at court in order to not try the monarch's patience. Similarly, the players could cut passages for Globe performances if it was obvious after a few showings that the play was dragging in parts.

But what about when the company performed at the private theater in Blackfriars? As anyone who has been to the Delacorte knows, seeing a Shakespeare play in the open air is quite different from seeing it in a darkened indoor theater. The company probably made adjustments for this fact. Plus, the King's Men frequently toured the provinces, likely removing references that were too London-specific, and perhaps adding in a song or dance (or two or three). Everything we know about acting companies of the day suggests that they altered their texts, sometimes drastically, depending on where they were playing. 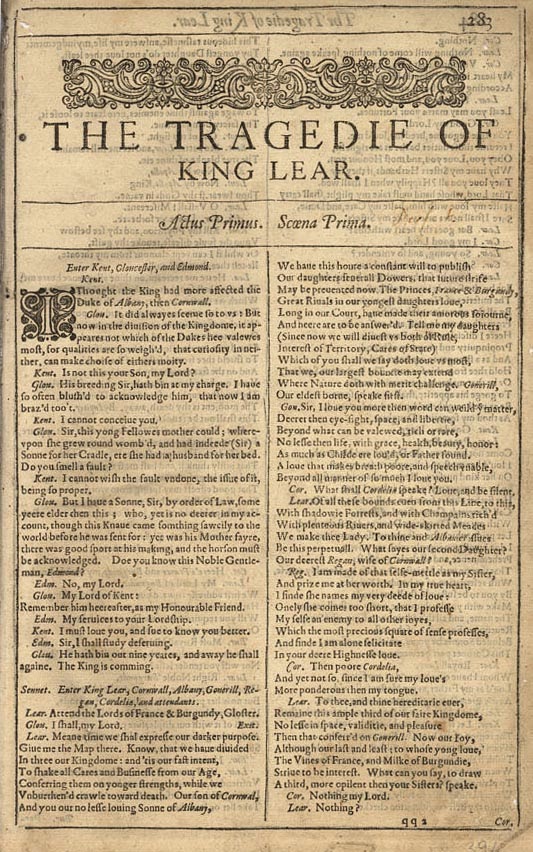 Then there is the matter of revising the repertoire over the course of years. As plays were revived, companies frequently reworked the texts, either getting the original playwright to change things or hiring new writers to make additions. How do we know this? We actually have the accounts! For instance, the diary of theater owner Philip Henslowe, who worked closely with the Lord Admiral's Men, shows a payment of four pounds to Samuel Rowley and William Bird for additions to Christopher Marlowe's Doctor Faustus. If plays had a long life, they could be revised several times, with new passages added and others deleted.

So when you pick up a copy of King Lear today, which are you reading? The True Chronicle Historie that appeared as a quarto? Or the Tragedie first printed in the folio edition of 1623? The answer almost always is BOTH.

Shakespeare editors will stitch together a new text out of the two (or more) existing ones from the original time period. The quarto of King Lear contains about 400 lines not in the folio version, and you get them all. The folio text contains about 100 lines not in the quarto. You get those, too! The result is a composite text longer than anything Shakespeare's company ever actually performed.

Many of the lines the folio cuts are unnecessary, and leaving them out speeds up the action of the play. Sometimes these are minor changes. In Act I, scene i (the act and scene divisions only occur in the folio), Cordelia says:

Why have my sisters husbands if they say
They love you all? Haply, when I shall wed,
That lord whose hand must take my plight shall carry
Half my love with him, half my care and duty:
Sure I shall never marry like my sisters,
To love my father all.

The folio text omits "To love my father all." This is a minor change hardly worth mentioning, and the quarto version might even be a little more clear. However, consider this exchange in the next scene:

Gloucester: He cannot be such a monster.

Edmund: Nor is not, sure.

Gloucester: To his father, that so tenderly and entirely loves him.—Heaven and earth!—Edmund, seek him out; wind me into him, I pray you: frame the business after your own wisdom. I would unstate myself to be in a due resolution.

Having Edmund insert himself and Gloucester reflect on his love for Edgar is fine, but doesn't the audience want to just get on with the story? The folio wisely abridges the text to:

Gloucester: He cannot be such a monster. Edmund, seek him out; wind me into him, I pray you: frame the business after your own wisdom. I would unstate myself to be in a due resolution.

One of Edmund's speeches later on in the scene also gets trimmed, and in scene three, some of Goneril's verbosity disappears as well, including this whole passage:

Not to be overruled. Idle old man,
That still would manage those authorities
That he hath given away!—Now, by my life,
Old fools are babes again; and must be us'd
With checks as flatteries,—when they are seen abus'd.

There's certainly nothing wrong with these lines, but they aren't particularly needed, either. Scene four of the folio leaves out quite a number of lines in the quarto text, including one of the Fool's songs. Though the fifth scene remains relatively unchanged in the folio, Act Two continues to trim back unnecessary lines, including reducing this speech by Gloucester:

Let me beseech your grace not to do so:
His fault is much, and the good king his master
Will check him for't: your purpos'd low correction
Is such as basest and contemned'st wretches
For pilferings and most common trespasses,
Are punish'd with: the king must take it ill
That he, so slightly valu'd in his messenger,
Should have him thus restrain'd.

In the folio text it is much simpler:

Let me beseech your grace not to do so,
The King his Master, needs must take it ill
That he, so slightly valued in his messenger,
Should have him thus restrained.

In Act IV, the folio text increasingly cuts speeches and removes unnecessary dialogue, including excising the entirely of scene iii, which appears in the quarto version only. In this act, the audience is approaching the climax of the story. The unnecessary verbiage slows everything down and works against the swelling action of the play.

The folio version trims a number of passages in Act V. It leaves Lear's lines intact, though it does sometimes alter them (usually for the better). The effect is to keep the focus on Lear. The last thing a production wants is for the audience to get distracted by a minor character like Albany, who has quite a few more lines in the quarto version than in the folio.

So what is a director to do? Just perform the folio text? That would require getting rid of the lovely mock trial scene. Stick with the quarto version? That would ignore some of the rather wise changes the folio makes in speeding up the action.

It seems to me the wisest decision is to treat the text of King Lear the same way Shakespeare's company treated it: as something far from sacred. If a passage isn't working or slows down the narrative, get rid of it. There's no need to insist on performing every word, especially when we are dealing with a conflated text that includes more lines that any of the versions performed during Shakespeare's lifetime.