I have a long-standing interest in George Bernard Shaw's five-play cycle Back to Methuselah. Four years ago I gave a paper on it at the Comparative Drama Conference in Baltimore, and I also spoke about it this January at the annual conference of the Modern Language Association.

That's why I knew I had to go when Gingold Theatrical Group announced they would be doing a staged reading of the whole epic over two different nights. Tonight they presented radically cut versions of the first three plays: In the Beginning, The Gospel of the Brothers Barnabas, and The Thing Happens.

I would have liked to have seen a full evening of the first play, which begins in the Garden of Eden. Tony Roach was an excellent Adam, though, and I thoroughly enjoyed Talene Monahon as Eve. (Monahon was also wonderful as Blanche in GTG's production of Shaw's Widowers' Houses a few years ago.) The real revelation, however, was Brenda Braxton as the scene-stealing Serpent.

Shaw wrote part two of the cycle to take place in his own present day, and it pairs very nicely with the third part, which takes place in the year 2170. Actors in the previous play are meant to appear again in his vision of the future. While Shaw makes this clear in the text, seeing it onstage really drives home the point. After the end of the third part, director David Staller was kind enough to invite me up on stage for a talkback with the audience, something he threatened to do again if I return next month for parts four and five: The Tragedy of an Elderly Gentleman and As Far as Thought Can Reach.

Well, I'll definitely be back, and if you missed the first part, don't worry! You can still enjoy the second half of the cycle on its own, and you'll get to see Shaw at his most audacious. The reading will be held at 7:00 on Monday, November 19th at Symphony Space. Get your tickets now! 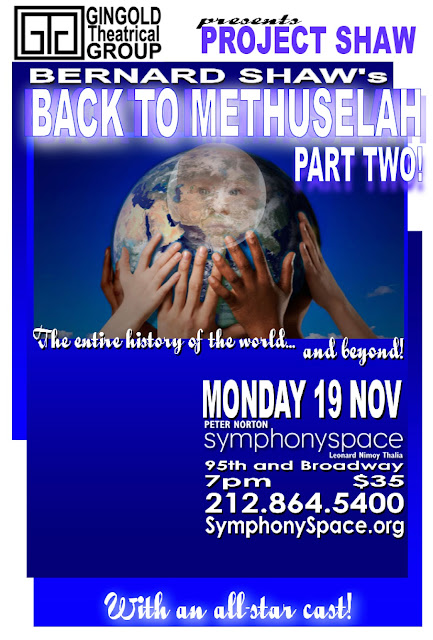