Tomorrow (Monday) my one-act play The Love Songs of Brooklynites will have a staged reading as a part of Emerging Artists Theatre's New Work Series. 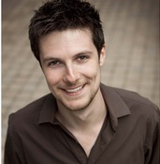 Zach McCoy is playing the part of Chuck, a recent transplant to Brooklyn from Wisconsin. Zach's favorite stage credits include David in Love and Human Remains, Bernard in Boeing, Boeing, and Colin in The Birthday Boys. He also appeared in my play The State of Colorado v. Tennessee Williams. He currently does extensive voiceover work, reviews plays for The Drama League, and runs a sustainable seafood restaurant on the Upper West Side. Zach is a proud graduate of Butler University in Indianapolis, IN.

The role of Chuck's neighbor Abbie is being played by Jessica L. Vera. Her previous credits include Bullet Catchers, The True History of the Tragic Life and Triumphant Death of Julia Pastrana, the Ugliest Woman in the World, and A Snowfall in Berlin. She has also appeared on the Hulu series The Path and is in an independent film, Beyond the Night, which will be premiering at Woodstock Film Festival. I've also had the pleasure of working with Jessica as part of the 36th Street Writers Block, where she read the leading roles in Capital and Bones of the Sea as I was developing them.

The reading is directed by Dev Bondarin, who is the Artistic Director of Astoria Performing Arts Center where she has directed Follies, Raisin, ...Spelling Bee, Astoria Stories, Merrily We Roll Along, and In The Bones. As Associate Artistic Director of Prospect Theater Company, she directs a musical theater lab which has produced over 80 new, short musicals. Her other credits include Elevator Heart, King Lear, and A Home Across The Ocean.

Tickets for the reading (which benefits Emerging Artists Theatre) are $10. That includes admission to readings of two other short plays, The Cruelty of Children by Raymond McAnally and Hamlet Investigations, Inc. by Ellen Abrams.

The theatre is located at 15 West 28th Street on the second floor. Hope you can make it!