Once on this Island

This afternoon, I saw the Broadway revival of Once on this Island. As you'll likely never see a production of this classic Ahrens-Flaherty musical quite so good, take my word for it and go.

My only other experience seeing Once on this Island was a college production described by one of my friends as "a noble effort." The piece certainly has its challenges. Lynn Ahrens' lyrics build in resonance, as does the music of Stephen Flaherty, so an opening number like "We Dance" might seem to be trying just a little too hard, but when the motifs laid out in the beginning come to fruition in the piece's final number, it's hard not to be moved.

There are strong performances all around, but the most memorable come from the four gods. Merle Dandridge plays Papa Ge, lord of death, a role generally given to a man. Dandridge makes the part her own, though, and is legitimately frightening at times. Quentin Earl Darrington plays Agwe, spirit of the sea, and his strong, fluid movements make him irresistible on stage. Alex Newell is a very grounded Asaka, an earth-mother figure who both comforts and can be capricious. Best of all, though, is Lea Salonga as Erzulie, queen of beauty and love, who especially shines in the song "The Human Heart."

Perhaps the most memorable aspect of the production, however, is the simple but brilliant set designed by Dane Laffrey, who also created the splendid set for the Deaf West production of Spring Awakening. Since the show is playing at Circle in the Square, the stage is quite literally a sand island surrounded on four sides by the audience. At one end of the stage is a pool of water, used humorously for an opening sequence reminding patrons to turn off their cell phones, but later used for quite moving entrances and exits.

Director Michael Arden uses the set in unexpected ways, as beds emerge and dance floors get revealed. Live flames in the form of candles, chandeliers, and torches light up the stage, and when a sheet descends for projections and shadows, it appears that everyone on both sides of it is able to get a good (though different) view of the action. This is perhaps the best use of the space at Circle in the Square I've ever seen.

But don't just take my word for it. Go to the show's website and get tickets to see it yourself! 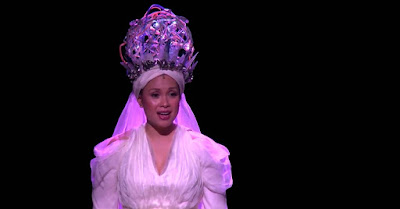