I'm excited that my article "Premieres Unpleasant: How the Infamous Debut of Shelley's The Cenci Helped Make Shaw a Playwright" is appearing in the newest issue of the journal SHAW. 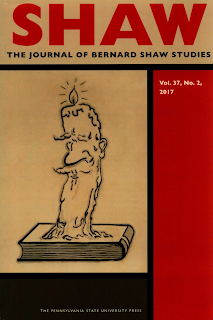 The piece started out as a paper I gave at the "Shaw in New York" conference in 2015. It was well received, so I did some work on it, including tracking down the rights to some images I wanted to reproduce with the article, and now it's running in the journal.

That's quite an honor, considering the high quality of some of the other articles in this issue. Bernard Dukore has a great piece on Shaw and paternity, Jesse Hellman has a fascinating article on Shaw's flirtation with Grace Gilchrist, and Stanley Weintraub has published a piece on Shaw's playlets based on the talk he gave at the same New York conference.

Also, Pablo Ruano has an article comparing Shaw to an author near to my heart: Charles Dickens. Ruano notes that Sartorius and Lickcheese in Shaw's Widowers' Houses closely resemble Caseby and Panks in Little Dorrit, Britannus in Caesar and Cleopatra seems to be modeled after Mr. Podsnap in Dickens's Our Mutual Friend, and Bohun in Shaw's You Never Can Tell is based on Jaggers in Great Expectations.

There are also a couple of internationally focused articles in the journal, Kay Li's "A Rendezvous in Beijing" about Shaw's meeting with Chang Hsiao Liang and L.W. Conolly's exquisitely titled "GBS in the USA." A special thanks to editor Christopher Wixson for putting together this great issue!
Posted by James Armstrong, Playwright at 7:52 PM