The International Shaw Society's "Shaw in New York" conference is off and running!

Last night, David Staller, artistic director of The Gingold Theatrical Group, kicked off the conference with a keynote address about his work with Project Shaw. For nine years now, GTG has been giving concert readings of the plays of George Bernard Shaw and his contemporaries. This Monday, they will be presenting The Doctor's Dilemma at Symphony Space. I'm looking forward to it!

After the keynote, Terry Teachout, drama critic for The Wall Street Journal, gave a wonderful reflection on the state of Shaw productions today. Teachout praised Theatre Bedlam's landmark production of Saint Joan, which I had the good fortune of seeing in 2013. Director Eric Tucker got four talented actors (including himself) to perform all of the parts. The production was in modern dress with an innovative set and the audience's configuration changing periodically. Teachout said the production should change the way we do Shaw.

He compared the way we see Shakespeare produced with the way we normally see Shaw's plays. Shakespeare can be set in any period, but Shaw is almost always set in vaguely Edwardian times. With Shakespeare, we expect avant-garde techniques, whereas Shaw is always done with simple, straight-forward Realism. Shakespeare's plays can be trimmed back, but Shaw's are almost always performed uncut from their published versions, even though those texts were rarely performed in their entirety during Shaw's time. We expect double-casting with Shakespeare, but require large, expensive casts for Shaw. That means while producing Shakespeare can be affordable, the economics make Shaw's plays a rare event for most theaters.

The solution, Teachout said, is to start treating Shaw's plays like Shakespeare's. Granted, directors' concepts don't always work for Hamlet, so they won't always work for Saint Joan, either. The point is we need to allow ourselves to try things. If Shakespeare's texts are not sacred, why should Shaw's be? Most of his important plays are in the public domain anyway, so there is no need to get permission from an estate. Let's start seeing Shaw liberated from a single way of producing his work, and maybe he will become as much our contemporary as Shakespeare seems to be.

Today, the conference continued, with legendary Shaw scholar Stanley Weintraub introducing some of Shaw's playlets that occur outside the plays, in various essays, articles, and prefaces. Four professional actors read scenes from these playlets at the Bruno Walter Auditorium of the New York Public Library for the Performing Arts. My favorite was a scene between Jesus and Pontius Pilate penned in 1933 for the preface to On the Rocks. Weintraub said this scene could be read as a continuation of Shaw's early Passion Play, a blank verse drama he began in 1878 but never finished. 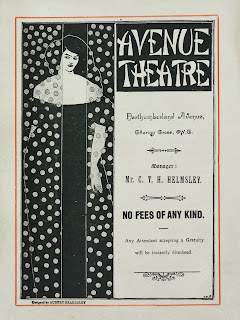 Later that morning, Anne and Martin Wright gave a presentation of a new interactive on-line tour of Shaw's Corner, the author's home in Ayot St. Lawrence. I was fascinated by seeing in the house a design by Aubrey Beardsley that I immediately recognized as the illustration used on the poster advertising the premiere of The Land of Heart's Desire by William Butler Yeats. Originally, The Land of Heart's Desire had been done as a curtain raiser for John Todhunter's A Comedy of Sighs at the Avenue Theatre in March of 1894. What was the original artwork doing in Shaw's House?

After the Wrights' presentation, we all walked over to the Lincoln Center campus of Fordham University for lunch and the afternoon sessions. I was a part of a session chaired by Jean Reynolds, which included Howard Einsohn talking about Shaw's political address to the American people given at the Metropolitan Opera House in New York in 1933. He was followed by Virginia Costello speaking about how Dorothy Day had dealt with the challenges of charity that Shaw presented in his play Major Barbara. I gave my talk on how Shaw was influenced by Percy Bysshe Shelley's play The Cenci, and Charles Del Dotto finished up the session talking about Shaw and the sublime.

After that, I attended a session on Pygmalion chaired by Ellen Dolgin. Jean Reynolds began the discussion with a paper on the play as meta-drama. She pointed out that it begins with theatergoers having just left a show and Henry Higgins being asked if the trick he does analyzing people's speech allows him to make a living in a music hall. Peter Conolly-Smith then spoke about the history of the German language version of Pygmalion, which actually premiered prior to any English production.

The play was presented for 25 performances in Vienna, then ran for 107 nights in Berlin, before it made its American premiere at the Irving Place Theatre in New York... in German! In fact, the play was also performed in unauthorized productions in Polish and Hungarian (translated from the German) before its London premiere. An American pirated version of the play even appeared in English, horribly reverse-translated from the German version, in some disreputable paper called The New York Times.

Tomorrow, the conference continues with Joseph Hassett speaking about Shaw and Yeats. Michael O'Hara will also be talking about Shaw and the Federal Theatre Project, and both Jennifer Buckley and Mark Lepitre will be speaking on Back to Methuselah. I'm looking forward to it!
Posted by James Armstrong, Playwright at 7:57 PM