Today was day three of "Shaw in New York," the conference of the International Shaw Society held at Fordham University and the New York Library for the Performing Arts. Today, however, all of the events were at Fordham, where conference goers had almost 12 hours of Shavian musings. 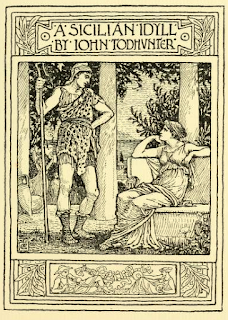 Joseph Hassett was the featured speaker this morning, addressing the struggle between George Bernard Shaw and William Butler Yeats over the actress Florence Farr. In 1890, Farr had appeared in John Todhunter's play A Sicilian Idyll in the role of an ancient priestess. Yeats said he had never heard anyone recite verse better than she did in the play. Shaw didn't care much for the play, but was considerably taken by the actress's good looks.

At Shaw's urging, Farr played Rebecca West the next year in a production of Henrik Ibsen's Rosmersholm. Yeats believed the prose play was a waste of her powers and feared it would draw her away from poetic drama. The following year, Farr originated the role of Blanche in Widowers' Houses. Shaw appeared to be winning the tug-of-war.

At a Christmas party thrown by Todhunter, Farr asked Yeats to write a play for her, and that play eventually became The Land of Heart's Desire, which premiered in 1894 at the Avenue Theatre. Originally, Shaw was supposed to write a play to be performed with that piece, but when his play remained unfinished, the theatre replaced it at the last minute with a lightweight Todhunter work, A Comedy of Sighs.

Furious at Shaw, Farr insisted that he complete the piece he had agreed to write. Sitting outdoors on the embankment, Shaw finally completed the play, his classic Arms and the Man. The play was done at the Avenue with Farr in the role of Louka. It was such a hit that Richard Mansfield produced it later that year at the Herald Square Theatre in New York City. Shaw's career seemed to be secured, largely due to the efforts of Farr.

Here's the part where Hassett answered the question I had yesterday about Aubrey Beardsley's illustration used to advertise The Land of Heart's Desire. It seems that previously Farr owned the illustration. While she had not appeared in the original version of the play, Yeats dedicated The Land of Heart's Desire to her, so she obviously had a close association with it. Later in life, when Farr was hard up for funds, she sold Beardsley's artwork to Shaw, and it remains to this day in the writer's former home, Shaw's Corner.

After Hassett's wonderful talk, Ellen Dolgin spoke about Shaw's relationship with The Theatre Guild in New York. The Guild produced Heartbreak House in 1920, and then requested the author provide them with another great play. Shaw responded by sending them the massive five-play cycle Back to Methuselah, which the Guild produced in 1922. The following year, they staged the first English-language production of Saint Joan.

Michael O'Hara spoke about Shaw and the Federal Theatre Project, which at its height employed thousands of people and brought drama to Americans all across the country. Because the FTP required that the bulk of a production's expenses go to the workers producing it, there was little money left for royalties. Shaw, however, agreed to allow the organization to produce his works without his usual royalties, provided the top ticket price be no higher than 55 cents. The FTP responded by producing Great Catherine, Pygmalion, On the Rocks, and Androcles and the Lion, with many of the performances actually free.

Other scholars delivering papers today included Michel Pharand, J. Ellen Gainor, Larry Switzky, Jennifer Buckley, Mark Lepitre, and Gustavo Rodriguez Martin. In many ways, however, the highlight of the day was a musical presentation of songs by Shaw performed by Brigitte Bogar, with commentary by Christopher Innes.

Tomorrow the conference continues, followed by a Project Shaw reading of The Doctor's Dilemma at Symphony Space.
Posted by James Armstrong, Playwright at 7:29 PM