When I was doing research at the British Museum, I picked up on sale a really fun book called Angels & Ducats: Shakespeare's Money & Medals. 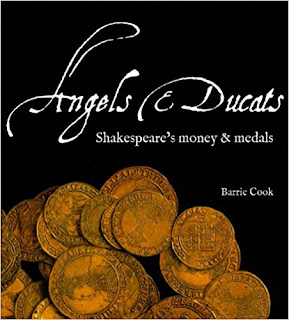 The book, by the museum's curator of medieval and early modern coinage Barrie Cooke, was published to accompany a 2012 exhibition at the British Museum. It goes into some detail about the coins of Shakespeare's day and how they are referenced in drama of the period.

In a prologue, Cooke quotes the same passage from Timon of Athens that I reference in my play Capital: "Gold? Yellow, glittering, precious gold? / No, gods, I am no idle votarist..." As Cooke points out, the passage was a favorite of Karl Marx and shows how the theme of money often comes up in Shakespeare's work.

The first chapter of the book deals with medals rather than money. Though Shakespeare rarely mentions medals (which were relatively new in the England of his day), there is a notable reference in The Winter's Tale when Leontes says of his wife that the King of Bohemia "wears her like a medal, hanging / About his neck."

A chapter on the costs of theatre details how much audience members might spend to see a play in Shakespeare's day. People going to the Globe on the south side of the Thames might spend four to six pence to cross the river by boat. Once in Southwark, spectators could pay a mere penny for entrance to the yard, where groundlings stood to watch the play. To sit in the lower galleries was two pence, and three pence bought access to the upper galleries. For a shilling, more refined audience members could have entry into a box with a private entrance.

Prices at the indoors Blackfriars Theatre were considerably more. There, a shilling was required for general entrance to the pit, and entrance to a box would cost half a crown, or two shillings and sixpence. (Four pennies were in a groat, three groats made a shilling, and there were 20 shillings in a pound. That means there were five shillings to the crown, which was worth a quarter of a pound. Confused yet?)

Chapter Three covers the coin known as the angel, which in Shakespeare's day was worth 10 shillings, twice as much as a crown. These coins had an image of the Archangel Michael on them, and they were used not just as money, but also as part of the ceremony of Touching for the King's Evil. People afflicted with scrofula would go to the monarch in order to be cured. The king would touch the patient and then hang an angel around the person's neck. For this reason, many angels that exist today have a hole pierced in them.

Another chapter details the foreign coins common to the England of Shakespeare's day. The ducat was a gold coin from Venice used frequently in Shakespeare's plays. In The Merchant of Venice, for instance, Antonio borrows 3,000 ducats from Shylock, and in Cymbeline Posthumus makes an enormous 10,000-ducat bet. Curiously, Desdemona in Othello references not the Venetian ducat but the Portuguese crusado when she says: "Believe me, I had rather have lost my purse / Full of crusadoes..."

With all these different coins, how could someone tell which were real and which were counterfeit? Merchants weighed coins and also tested their purity by means of a touchstone. Cooke points out that Robert Armin, who played the character of Touchstone in As You Like It, had started out as a goldsmith, so the name could have been an in-joke.

An epilogue to the book mentions that when Shakespeare's fellow actor Augustine Philips died, he left in his will "a Thirty shillinges peece in gould" to the Bard. Cooke says this might have been a special coin given to Philips by Queen Elizabeth after a particularly good performance. That (along with much of the book) is speculative, but Angels & Ducats is still worth a read.
Posted by James Armstrong, Playwright at 11:14 AM