The eminent tragedian of the Victorian era, William Charles Macready, was often paired with an equally skilled leading lady, Helen Faucit. After Faucit went her own way, however, another actress stepped up to Macready's side. She was Mary Warner, and also an important performer of note. 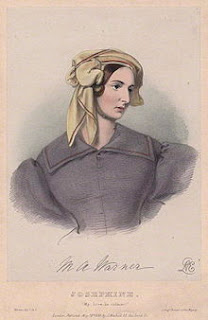 Born Mary Amelia Huddart, she came from a family of thespians and began acting when she was around 15 years old. By 1829, she was making appearances in Dublin, and the following year Macready discovered her talents and began casting her whenever possible. She made her Drury Lane debut on November 22, 1830 in Thomas Otway's Venice Preserved playing Belvidera opposite Macready's Pierre.

Initially, there seems to have been some romantic attraction between the two. Macready, however, was married, and a devoted husband and father. While he and Miss Huddart were performing together in Manchester, the actors were fortunately able to fall into a purely professional relationship, with Macready recording in his diary that he was relieved to be set free from a temptation.

As Miss Huddart, she frequently played secondary female roles to Macready's regular leading lady, Helen Faucit. For instance, she took the role of Paulina to Faucit's Hermione in Shakespeare's The Winter's Tale. Around 1836 or 1837 (it's unclear which) she married the tavern keeper Robert Warner, and as Mrs. Warner she took on increasingly strong roles, such Regan in Macready's production of King Lear.

When Macready took over the management of Covent Garden in 1837, Warner joined his company, and she followed him when he moved to the Haymarket Theatre two years later. It was at the Haymarket that Warner originated the role of Lady Arundel in Edward Bulwer-Lytton's play The Sea Captain.

Eventually, Warner rose to performing Lady Macbeth with Macready. In 1844, she took on the management of Sadler's Wells, along with Samuel Phelps and T.L. Greenwood. Her final performance in England came in 1851 at Sadler's Well, acting the title role of Mrs. Oakley in George Colman the Elder's The Jealous Wife. After that, she departed for America, where British actors frequently thought they could make their fortunes.

Unfortunately, Warner had developed cancer, and she eventually returned to London, where the retired Macready kindly gave her some financial assistance. In 1853, she filed for bankruptcy, and the following year she died. Macready saw to the upbringing of her son, while the wealthy philanthropist Angela Burdett-Coutts took charge of her daughter.

Throughout her career, many actors and critics paid tribute to Warner's considerable talents.  One appreciation came in the form of this anonymous acrostic, which appeared in the Theatrical Journal of 1839:

M ild in your natural character, thou art
A n able actress of the fiery mood;
R ebundant action, frequent strut and start,
Y our judgement wisely tells should be subdued.