In their book Making the Scene: A History of Stage Design and Technology in Europe and the United States, Oscar Brockett, Margaret Mitchell, and Linda Hardberger give a comprehensive view of the history of scenic design. The beautifully illustrated volume includes photographs of classical theatres, like this Hellenistic stage in Priene, Turkey: 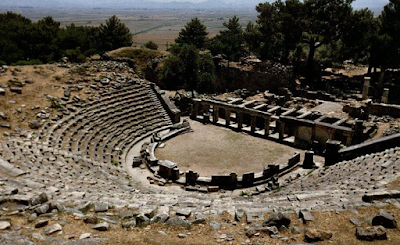 It also has Renaissance scenic designs, like this illustration by Serlio for a comedy: 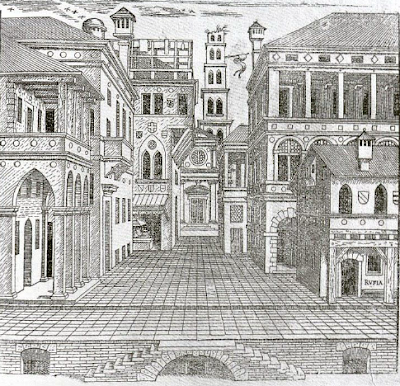 However, I want to talk about the books chapter on Neoclassicism and Romanticism. The authors use Mozart's opera The Magic Flute to demonstrate this rivalry of opposites. A key figure here is Johann Wolfgang von Goethe, who opened the Weimar Court Theatre in 1791.

Goethe first became known for writing pre-Romantic Sturm und Drang plays like Goetz von Berlichingen. He also wrote the greatest play of the Romantic Era, Faust, the first part of which was published in 1808. However, the style he developed at the Weimar Court Theatre came to be known as Weimar classicism. Here's a design he did for The Magic Flute in 1794: 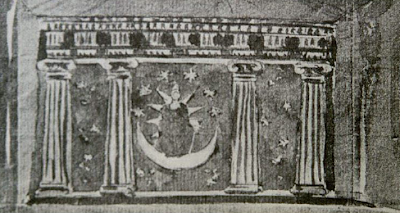 The classical motifs are unmistakable, and the image's restraint is characteristic of Goethe's style. Not all neoclassical designers held with Goethe's simplicity, however. Consider this 1815 design by Karl Friedrich Schinkel done for the same Queen of the Night scene in The Magic Flute: 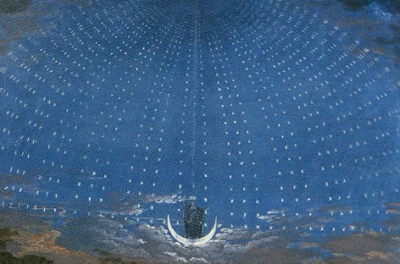 Everything is still perfectly ordered, balanced, and harmonized, but the lesson here seems to be that more is more.

When it came to excess, Romanticism could always do the neoclassical style one better. That pesky order went out the window, though, as emotion and drama reigned. In 1818, the Romantic scenic designer Simon Quaglio came up with this idea for a production of The Magic Flute at the Royal Theatre in Munich: 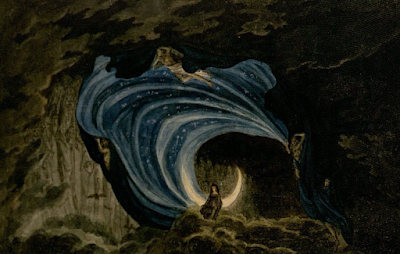 Movement replaces stasis, and feeling undoes balance. They're both lovely, but ultimately I prefer Quaglio's design.
Posted by James Armstrong, Playwright at 7:27 AM