Joanna Baillie is probably best known for her tragedy De Monfort, but she also enjoyed considerable success with a later drama, The Family Legend.
Baillie rose to fame after publishing the first volume of her Plays on the Passions in 1798. After De Monfort, the strongest piece in that volume, was performed at the Theatre Royal, Drury Lane in 1800, Baillie issued a second volume of Plays on the Passions in 1802. She published a volume of miscellaneous plays in 1804, but still held back The Family Legend from being published, in hopes of having it produced first.
A production at Drury Lane was not forthcoming, but Baillie's friend Walter Scott helped to secure a production in Edinburgh. Scott himself wrote the prologue to the play, which as the title suggests, is based on a legend about a feud between the Maclean and Campbell clans. The actor Daniel Terry played the Earl of Argyll, leader of the Campbell clan, and also recited Scott's prologue.
When the play opens, Argyll's daughter Helen has been married to the chief of the Maclean clan in order to resolve a feud between the two families. They have a baby son together, but many of the Macleans are furious that a half-Campbell is set to one day rule over them all. The vengeful Benlora, who was once imprisoned in a Campbell dungeon, calls Helen "a bosom worm, / Nursed in that viper's nest, to infuse its venom / Through all our after race."
In reality, Helen is not only virtuous, showing kindness to the misfortunate, but also fiercely loyal to the Maclean clan that she now regards as her new family. When her brother, the Lord of Lorne, comes in disguise to see her, she tells him:
here my place I'll hold
As dame and mistress of the warlike clan
Who yield obedience to their chief, my lord ;
And whatsoe'er their will to me may bear,
Of good or ill, so will I hold me ever. 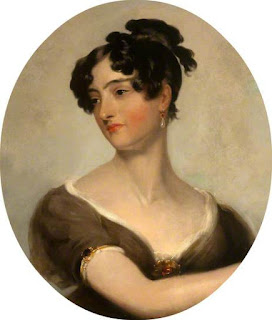 The Lord of Lorne, it so happens, was played by Henry Siddons, son of the famous Sarah Siddons who had originated the role of Jane De Monfort in Baillie's earlier stage success. Lorne's sister Helen was played by Henry's wife Harriet. Though she had not been born in Scotland, Harriet (the daughter of the famed Scottish actor Charles Murray) was considered Scottish by Edinburgh theatre fans, who referred to her as "Our Mrs. Siddons" to distinguish her from her mother-in-law.
Harriet got to really show off her acting in the third act of the play, as the Macleans abandon her character on a tidal island to drown when the sea rises. Putting her trust in God, Helen raises her eyes to heaven and says:
Thou art i' the blue coped sky—th' expanse immeasurable;
I' the dark roll'd clouds, the thunder's awful home:
Thou art i' the wide-shored earth,—the pathless desert;
And in the dread immensity of waters,—
I' the fathomless deep thou art.
Awful but excellent! beneath thy hand,
With trembling confidence, I bow me low,
And wait thy will in peace.
Fortunately, Helen does not drown. Fisherman rescue her and return her to Lorne and his friend, Sir Hubert de Grey. In Act IV, they bring her back to her father's castle. Lorne wants revenge, but his father cautions him that they must be careful. Then, a messenger arrives with false news from the Maclean clan that Helen died tragically in an unforeseen illness and was bitterly mourned. This sets the stage for Act V, when Helen's deceitful husband and the other members of the Maclean clan arrive at Argyll's castle wearing black and bewailing the innocent woman they tried to murder.
How does the play end? No spoilers here, but it should be sufficed to say that medieval Scottish clans were not generally known for their tendency to forgive and forget. The play was a hit in Edinburgh, and in 1815 it was produced at Drury Lane as well. I'd love to see a modern production of the piece!
Posted by James Armstrong, Playwright at 9:06 AM