I've written previously about Hermann Sudermann's play Heimat (Home), and I even presented a paper this summer at a Shaw Symposium about Sarah Bernhardt's starring in the play in London.

That's why when I saw on ebay the cover of The Illustrated London News with Sarah Bernhardt pictured in that very role, I figured I had to get it, even though the seller was across an ocean in Tauton, UK.

Well, the cover arrived in a shipping tube, and I placed it under piles of books for a few days to flatten it out, but now it looks pretty good. Due to libraries being closed for the epidemic, I can't make a high-resolution scan right now, but I took this picture of it with my camera: 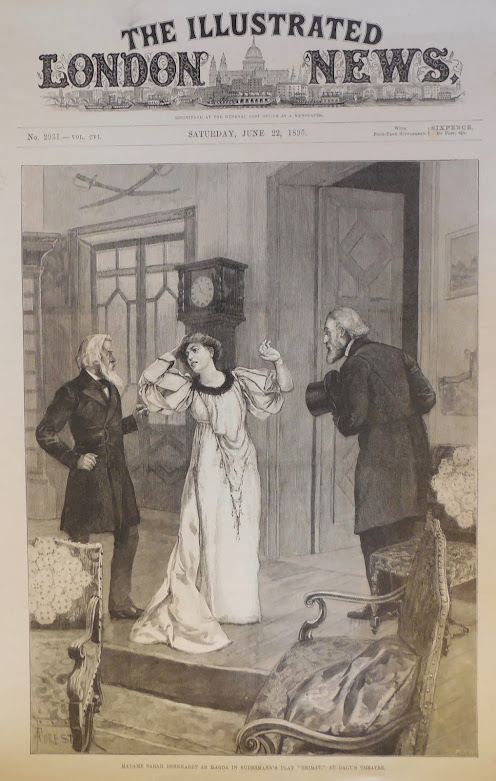 The Illustrated London News was a weekly publication that ran between 1842 and 2003, though after 1971, it switched to monthly editions. Its first issue reported on a masquerade ball held by Queen Victoria, but the magazine covered a variety of topics of city-wide, national, and international importance. It also ran theatre reviews.

On June 22, 1895, the magazine ran Bernhardt on the cover and a description of the show on the inside pages. All of the issues of ILN are available online by subscription, so I decided to check out the article. Like many reviews of the play, it draws attention to Bernhardt performing the show in London around the same time that Eleonora Duse was appearing in the same role.

"London has seen two Magdas, and personal preferences are inevitable," the article states, adding that "it is quite easy to admire both these great artists." The reviewer did find, however, that Bernhardt's supporting cast was superior to that of Duse.

Anyway, I was glad to make the find, and grateful to the seller for shipping it to me!