As the world continues to fall apart around us, I've been sheltering in place, reading--of all things--melodrama.

John Baldwin Buckstone's 1826 play Luke the Labourer is surprisingly relevant to our nation's current situation, where the authorities seem unwilling and unable to protect us, especially when the criminals and abusers are people in authority.

Though the play's main villain is the titular labourer, his villainy is equalled by that of Squire Chase, the lord of the local manor. Clara appeals to him for justice after Luke strikes her aged father, but the squire instead sexually assaults her, and she only escapes from him through the miracle of melodrama.

When Clara's sweetheart Charles finds out about the injustices being perpetrated, he comments of the authorities: "if justice cannot be procured here, there are means to obtain it elsewhere." That was written in 1826. With no justice in sight for George Floyd and Breonna Taylor, is it any wonder that people today who hunger and thirst for righteousness are also looking elsewhere?

In Buckstone's melodrama, poor Bobby Trot is falsely imprisoned on the word of the squire, but his girlfriend Jenny isn't afraid to tell the truth about the situation:

Yes, madam; for it be a hard thing, so it be, for a poor young man to lose his character, because 'Squire do choose to say a thing that be false; but he does just as he likes--I wish I were a queen, or an emperor, for his sake: I'd see whether a 'Squire should not go in the cage as well as a poor man, when he deserved it.

So many of our political leaders today still say things that be false, and no doubt deserve to be caged more than the poor souls we incarcerate today in such large numbers. The characters in Luke the Labourer are not queens or emperors, but simple people, yet they stand up for what's right. Will we?

It's hard to know what the best course of action is in our present moment of supreme injustice, but if the authorities continue to fail to act, no doubt many people will be seeking to obtain justice elsewhere. 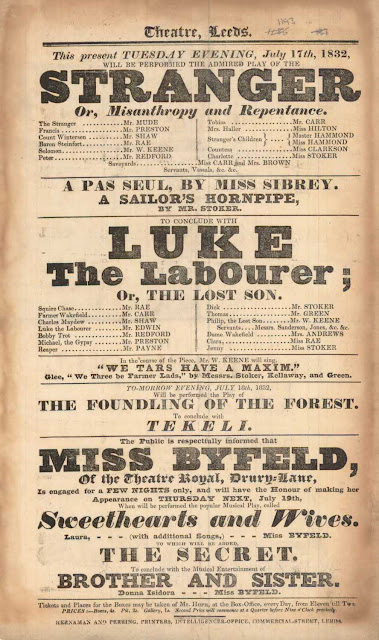