While Expressionism was being born in Austria and Germany, a very different non-realistic style was getting started in Italy. In 1909, the same year Oskar Kokoschka premiered Murderer, Hope of Women, the Italian poet and playwright Filippo Tommaso Marinetti published a manifesto for a new movement he called Futurism.

"We wish to sing of the love of danger, the habit of energy and audacity," Marinetti wrote, adding: "There is not beauty except in strife." Indeed, Futurism embraced violence and warfare, along with anything that could be considered modern: airplanes, motorcars, radios, bombs, and machine guns. Anyone who failed to revere the modern they considered passé and condemned as a "passatista," a term they used to ridicule old-fashioned critics and artists who did not agree with them.

The Futurists made bold claims that libraries and museums should be destroyed to make way for new, modern art forms. Though they might never have wanted to actually destroy Italy's artistic heritage, they claimed this as a goal in order to provoke outrage and controversy. The Futurists would read aloud manifestos by Marinetti and others in theatres, and then celebrate when audiences pelted them with vegetables.

Controversy was exactly what they wanted, and on at least one occasion the Futurist performers hurled the vegetables the audience had thrown right back at them. Marinetti would also insult audiences to their faces, for instance telling them that it would take a microscope to see their souls. Artists carried Futurist paintings onstage to exhibit them, and actors engaged in outrageous behavior just to provoke a response.

In 1913, Marinetti wrote a manifesto that dealt specifically with theatre. He called for a new type of drama that like the performances in variety theatres did not have to mean anything. The performance would be valued as a thing in and of itself, rather than creating an illusion of another world. He railed against the erection of an imaginary fourth wall and called for the performer and audience to relate directly to one another. He also called for the integration of film and other modern technologies into theatrical performance.

Like Expressionism, Futurism attracted figures interested in both drama and material arts like painting and sculpture. Umberto Boccioni, for instance, is mostly known today as a painter and sculptor, but he also wrote a number of short Futurist dramas known as "sintesi," or synthetic works. These were meant to be performed in rapid succession, shocking the audience out of their complacency. Boccioni's plays could deal frankly with sexuality, as was the case with Bachelor Apartment, make fun of critics, as with Genius and Culture, or sometimes be entirely surreal, as in The Body That Ascends.

When Italy entered the First World War, both Marinetti and Boccioni volunteered to fight. Boccioni was tragically killed during the war. Marinetti survived it, and after the war was over, started his own political party, which later merged with the Fascist party of Benito Mussolini. Though the Fascists and Futurists later turned on one another, Futurism's relationship with totalitarianism ultimately sullied the movement's reputation. 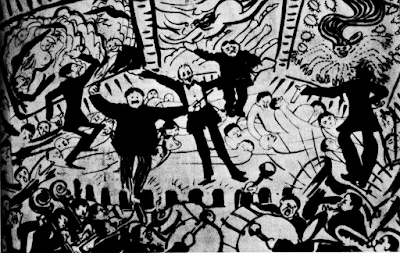 Posted by James Armstrong, Playwright at 8:07 AM