Oskar Kokoschka is a rare case in the theatre--a groundbreaking playwright who is actually better known as a painter. Shortly after his birth, a fire broke out in Kokoschka's hometown in Austria. As a young man, he took the story of that fire as an omen. Perhaps he should have, for Kokoschka would soon set fire to the arts throughout Austria and in fact across all of Europe.

Growing up in the late nineteenth century, Kokoschka attended schools that emphasized science and the modern world, but he found himself instead reading classics and experimenting in art. Against his father's wishes, he enrolled in the School of Arts and Crafts in Vienna. This was the avant-garde art school in Vienna, standing out in opposition to the traditional Academy of Fine Art. It also emphasized more practical arts, including architecture, design, and furniture-making. Both the cutting-edge style and more practical bent of the institution served Kokoschka well when he debuted his short play Murderer, Hope of Women, designing the show and the publicity posters himself.

Kokoschka wrote the play in 1907, while he was still a student at the School of Arts and Crafts. It premiered in 1909 at the Kunstschau Theatre. This was an outdoor summer stage that was part of a temporary arts complex erected to celebrate the 60th anniversary of the coronation of Emperor Franz Joseph I. During the premiere, soldiers watching from a nearby barracks saw the scene where a woman is branded onstage. They rushed in, provoking a riot. Police were called in, and the performance had to be broken off in the middle of the play.

Had the soldiers waited, they would have seen even more shocking events onstage. The play calls for the woman to then stab the man in his side and have her female companions imprison him in a tower. The man cannot live, yet cannot die, and the woman desperately tries to get into the tower to be with him. The woman finally opens the gate to the tower, and the man comes forth to murder her. In the last moments of the play, the man kills "like flies" both his own warriors and the maidens who accompanied the woman. He then exits through flames that have ripped open the tower "from top to bottom."

The apocalyptic fire that accompanied Kokoschka's birth seems to haunt the play. Also apparent is the artist's troubled relationship with women. Kokoschka already had problems when in 1912 he began an affair with Alma Mahler, widow of the famous composer Gustav Mahler and former lover of the architect Walter Gropius. While at the Museum Folkwang in Essen this summer, I saw this great double portrait he did of himself and Alma: 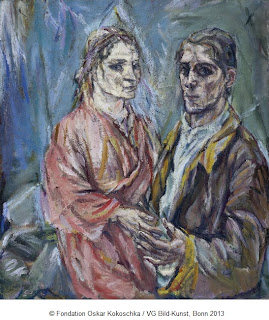 Ultimately, the two lovers went their different ways, with Kokoschka volunteering to join the Austrian cavalry in World War I. He never got over her, however. In 1918, he commissioned a life-sized doll to simulate Alma as he could no longer have the real thing. This is just depressing, and Kokoschka seems to have known it. He later destroyed the doll.

Alma went back to Gropius and married him, only to then have an affair with the writer Franz Werfel. Both of the Mahlers (along with Freud, Wittgenstein, Stalin, and others) are currently onstage in the Otho Eskin play Final Analysis playing off-Broadway. Eskin makes Alma out to be a sympathetic character, yet a very difficult woman to be with, both a passionate muse, and a dangerous adventuress. Like Kokoschka, Alma Mahler seemed to have enjoyed playing with fire.
Posted by James Armstrong, Playwright at 1:26 PM