The most recent issue of The Shaw Society's publication The Shavian arrived in the mail yesterday. I was pleased to see them include my article "Bumper Year for Shaw in New York." 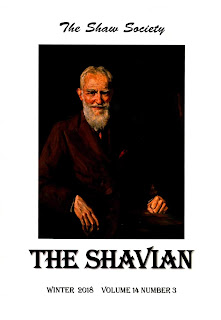 I knew I wanted to write something for The Shavian after I saw Bedlam's wonderful production of Pygmalion last spring. Director Eric Tucker did a wonderful job making the century-old play fiercely relevant to contemporary America.

Of course, Bedlam wasn't the only company doing Shaw in New York last year. Saint Joan returned to Broadway in a production by the Manhattan Theatre Club. Being a huge fan of Joan of Arc (and having written my own play about the Maid, Dark Night of the Soul), I knew I would be seeing that as well.

Plus, Gingold Theatrical Group always does a great job with their Project Shaw readings, and I knew they were planning a full-scale production of Heartbreak House. I pitched the idea of an article on all three to The Shavian's editor, Anne Wright. She liked the idea. The only problem was that Heartbreak House wouldn't be opening for several months. Still, she asked me to go ahead an write the article, getting in my copy as quickly as possible after Heartbreak House opened so the whole issue could be laid out, printed, and mailed by the end of the year.

Well, GTG outdid themselves, and I ended up having nothing but good things to say about their production, in spite of not knowing how good it would be when I agreed to review it. Director David Staller reset Heartbreak House as a play-within-a-play happening during the blitz in London, and the concept worked beautifully.

Incidentally, this issue of The Shavian also includes articles by Philippa Parker, Stanley Weintraub, Kenneth McConkey, and others, so I'm in good company!
Posted by James Armstrong, Playwright at 3:35 PM