Last night, I went to a fascinating talk by Christoph Bode at the Pforzheimer Collection of the New York Public Library. 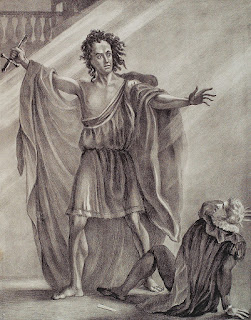 Dr. Bode, who teaches at the Ludwig Maximilian University of Munich, spoke on Mary Shelley's Frankenstein. He began his talk by discussing the significance of the University of Ingolstadt, where Victor Frankenstein studied. Why Ingolstadt? Of all the places where Frankenstein could have studied, why did Shelley choose there?

The University of Ingolstadt, which was founded in 1472, was extremely conservative, but its conservative bent created a progressive backlash. Several students who cherished the ideals of the Enlightenment got together to form a secret society championing their values. The group, which came to be called the Illuminati, eventually got banned and became the focus of a number of conspiracy theories.

It would have been in this environment that Frankenstein received his education. Interestingly enough, the university was moved to Landshut in 1800 following the French Revolution and the military threat of Napoleon. In 1826, it was moved again to its present location in Munich, where it was renamed... the Ludwig Maximilian University of Munich! Yup. Dr. Bode now teaches at the same school where Frankenstein went to college.

If you want to find out more about Mary Shelley's novel and the numerous stage and screen adaptations of it, you're in luck! In celebration of the 200th anniversary of the publication of the novel, the Morgan Library is putting on an exhibition that runs through January 27th. From 3:00 to 5:00 tomorrow, they'll also be sponsoring a "Frankenreads" program, in which people read aloud sections of the book.

Frankenstein's stage adaptations began in 1823 with Richard Brinsley Peake's Melo-Dramatic Opera in Three Acts, Presumption, the subject of my blog post tomorrow!
Posted by James Armstrong, Playwright at 8:36 AM