Well, I'm back from the annual conference of the Association for Theatre in Higher Education in Boston. That's no thanks to the MTA, who made me walk home from 96th Street after I got back, since they refused to run their promised shuttle buses for the hundreds of people waiting on the sidewalk after getting kicked off the 2 and 3 trains. 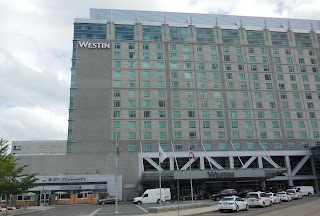 But that's another matter. How was the conference? It was held at the Westin Hotel, which is a perfectly good hotel in the middle of the completely dead Seaport area of the city. I was staying with my friend Natalia, who convinced me that the Silver Line could get me to the hotel and conference center. Well, the Silver Line (which is a monstrous bastard child of a bus and a trolley that drives through an infernal concrete bunker) will get you there, but you have to make sure not to get off at street level, since all of the sidewalks are closed. Once you get to the Westin, there's very little around it (other than a Dunkin' Donuts) so you're likely to stay inside for a conference there.

Once I got up to the upper level of the station, I was able to get to the Westin without too much of a problem. The first day got off to a rocky start, as the orientation time was moved forward at the last minute. The conference organizers had a printed program, but since so much of the information in it was incorrect, they asked that we instead use the conference app. They provided easy-to-follow instructions on how to install the app, but apparently never tested them on an Android device. While people with iPhones had no problems, anyone without an expensive iPhone had to find a workaround. Hopeless old-timers with flip-phones were completely screwed. Accessibility seems not to have been a big priority of organizers. 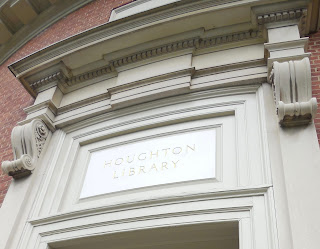 The conference was not all there was to do in Boston, though. I took advantage of the fact I was in town to apply for a readers card for Special Collections at the Harvard Library. I wanted to take a look at some of the toy theatres Harvard has. I got my readers card and went to the Houghton Library on Harvard's beautiful Cambridge campus. Once there, I was able to order up the boxes I had scoped out online. I ended up seeing not only a number of 19th and 20th-century toy theatres, but also a number of playbills for dramas associated with Lord Byron. I presented a paper on Byron during the second day of the conference, which was also when they had the society's awards ceremony. 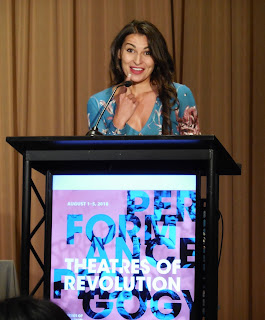 Martyna Majok was presented with the Jane Chambers Playwriting Award for Queens. I've read Majok's play Ironbound, and her drama Cost of Living won the Pulitzer Prize this year. Needless to say, things have been going very well for her lately! She gave an excellent acceptance speech, but later the mood was darkened when Quiara Alegria Hudes gave the keynote address together with her sister Gabriela Sanchez. Hudes, who is herself a Pulitzer laureate, remarked that she has become so disenchanted with the theatre that she has decided to take a "break" from writing plays. As much as "inclusion" was a buzzword at the conference (and "diversity" was used like a comma), Hudes said she didn't really feel her point of view was welcome in the contemporary American theatre. As a woman, as a Latina, and as a person of faith, she felt excluded from mainstream theatre. "You mention God in a play," she said, "and they're like, 'You're kidding, right?'" 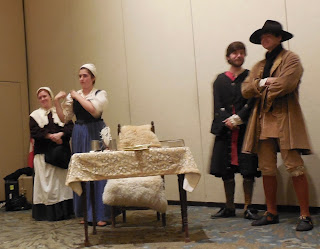 Well, it seems that is often the case. ATHE does have focus groups dedicated to looking at theatre and gender, race, and ethnicity, but not one dealing with class, and it did seem to me that discussions of the working class were noticeably absent at the conference. On the third day of the conference I went to the focus group meeting on theatre and religion (an issue Hudes addressed in her speech the previous day). I also presented a second paper on a panel sponsored by the group. It was great to meet other people interested in theatre and religion (many of them atheists, as it so happens, but who at least share an interest in exploring spirituality). A performance given on Saturday by History Alive spoke to the intersection of theatre and religion as well. Their interactive play Cry Innocent told the story of Bridget Bishop, the first person executed for witchcraft during the Salem Witch Trials.

Sunday I woke up too late to go to any of the morning sessions at the conference, but instead went to church with Natalia and then to Revere to see the annual sand-and-flower mandala that is built on the beach and then washed away with the tide. It was a performance of a different kind, but one that I very much enjoyed. 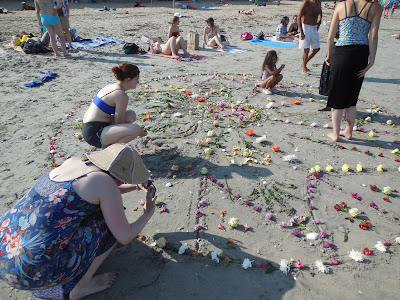