I'm happy to announce that my article "Succeeding the Siddons: Eliza O'Neill and the Triumph of the Romantic Style" has been published in the British journal Theatre Notebook. 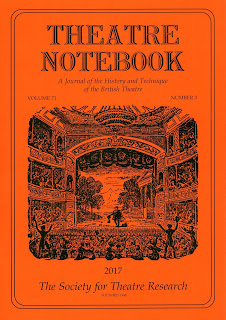 The article is based on a paper I gave at the Society for Theatre Research's conference on Theatre in the Regency Era in Cambridge, England. It deals with the effort to find a fitting successor to the great actress Sarah Siddons following her retirement.

If you're ever at the Huntington Library in San Marino, California, they have an excellent portrait of Siddons as the Tragic Muse. The folks at the Huntington were kind enough to allow me to reproduce an image of the painting in the journal.

Eventually, Eliza O'Neill became the new leading tragic actress in England. In order to reproduce an image of her, I requested new photography of an engraving of O'Neill owned by the British Museum. In November I got to spend some time in the prints and drawings collection at the museum, doing research on toy theatres. I hope to turn that research into another article soon.