Yesterday, I mentioned the 1993 film version of Shakespeare's Much Ado About Nothing. Today, I want to write about the film version of Richard III that came out two years later. 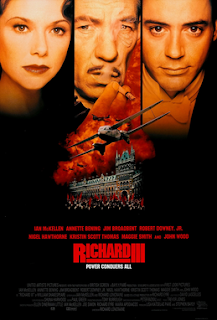 Ian McKellen had starred in a stage production directed by Richard Eyre that reimagined the chronicle play as taking place in Fascist-era Europe. The idea was to create a parallel reality in which Britain had gone the way of Germany and Italy and embraced totalitarianism. The concept worked.

McKellen himself wrote the screenplay, with help from the film's director, Richard Loncraine. It doesn't so much adapt Shakespeare's play as put it in a blender and turn it into a delicious new concoction. Scenes are rearranged, lines attributed to new characters, and completely new contexts created that will shock and amuse those familiar with the play.

I remember how when I was in college, I came into New York City to see the film at a discount movie theatre complex (now New World Stages). After the opening sequence in which Richard kills the former Prince of Wales and King Henry VI, we see a celebration for King Edward, complete with gorgeous 1930s-era ball gowns, a big band, and the vocalist Stacey Kent singing... there was a wave of laughter that came over the audience as people recognized what it was!

One of the more interesting (and appropriate) choices was to make Edward's queen and her family Americans. At first, I was skeptical of what seemed like a ploy to attract mainstream audiences with Hollywood stars like Annette Bening and Robert Downey, Jr., but the idea works. Elizabeth Woodville, who married Edward IV, was an outsider, a widow of one of Edward's opponents who did not come from royal stock. Making her family Americans makes sense.

The film also makes great use of unexpected locations. The ballroom scene was actually filmed in St. Cuthbert's Church in London. (The pillars are quite striking.) The bathroom of that fictitious ballroom, however, was actually the Holbein Room at Strawberry Hill! The real Tower of London seemed too familiar to be used as the Tower in the world of the film, so instead the Tower scenes were shot in gritty, industrial buildings.

If you've never seen the movie, definitely take a look. It's well worth viewing.
Posted by James Armstrong, Playwright at 9:54 AM