I've been in London the last few days, mainly doing research at the British Museum on 19th-century toy theatres.

After my first day in the research room of the prints and drawings division of the museum, however, I did manage to get to see some live, non-toy theatre. A colleague of mine had recommended a production of Oscar Wilde's A Woman of No Importance, so I saw that on Wednesday night. 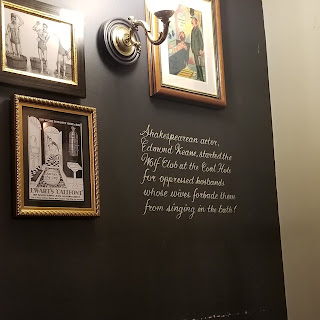 The play was enjoyable (especially the second half) and before the show I managed to have a meat pie at the Coal Hole, another recommendation of my colleague's. This is a pub that was formerly frequented by the actor Edmund Kean. Supposedly, the Coal Hole is where he started the notorious Wolf Club, a private dinning (and drinking) society for himself and his roistering working-class buddies.

Well, the Coal Hole was a bit more sedate that night, with few drunken vainglorious actors in sight, but the meat pie was quite good, and the next day I was back at the British Museum, going through nine volumes of enormous portfolio books with plates of toy theatres. Eventually, I made it through all of them, and was even able to explore the museum for a bit.

The evening of Thanksgiving, I saw Anders Lustgarten's play The Secret Theatre, all about Elizabeth I's spymaster, Sir Francis Walsingham. The play is wonderfully dark, and to add to the mystique, it was performed by candlelight in the Sam Wanamaker Playhouse, built right next to the reconstructed Shakespeare's Globe. I particularly liked Tara Fitzgerald's performance as Queen Elizabeth, and Aiden McArdle was magnificent as the poet (and Walsingham's son-in-law) Sir Philip Sidney. I'll share more news after I get back tomorrow! 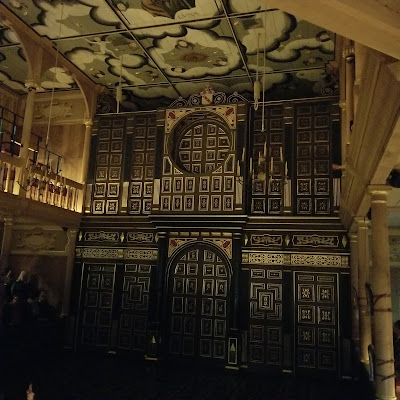