Yesterday, I went to a preview at the York Theatre Company of Desperate Measures, a wonderful new musical that reimagine's Shakespeare's Measure for Measure as... a Western of all things!

Though the conceit might sound a bit odd, it works. Let's see... Shakespeare has a law-and-order governor intent on never showing mercy. Yup, that works in the Old West. He has a troubled young woman who wants to take shelter in a convent. Works. Rampant prostitution? Works, works, works.

Instead of keeping the dialogue in blank verse, book writer Peter Kellogg transforms the unsung portion of the play into rhyming couplets. Though this makes the show sound more like Moliere than Shakespeare, it creates a theatrical artificiality that works well with the ridiculous plot.

The play handles the twists and turns of that plot rather differently than the Bard. In Shakespeare, we are made to suffer as we watch the characters agonize over seemingly impossible choices, but in Desperate Measures, we are invited to laugh. The ridiculousness of the characters' situations is particularly highlighted in the Act II number "Just For You," which combines Kellogg's witty lyrics with infectious music by composer David Friedman.

Friedman's country-music score soars during comic numbers like the strip-tease "It's Getting Hot in Here" and the I'm-not-in-love song "What Is this Feeling." Together with Kellogg's words, it transforms Shakespeare's darkest, most problematic comedy into a knee-slapping musical. This is definitely a show you won't want to miss. 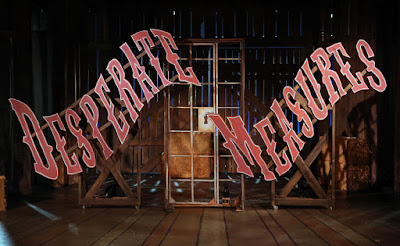 Posted by James Armstrong, Playwright at 7:46 AM