I'm back from the State College area in central Pennsylvania where Nittany Theatre at the Barn recently had a staged reading of my play Dark Night of the Soul.

The play was the winner of the theatre's 2017 Free Speech Play Contest. It tells the story of Joan of Arc, and is based in part on the actual records of her trial. You can find out more about the play at a special website I set up about it.

Laura Ann Saxe played Joan, and Dave Saxe read the part of the Earl of Warwick, the English nobleman charged with the task of discrediting and executing her. The trial was presided over by Bishop Pierre Cauchon (played by John Koch). Most of the clergy present were intent on finding Joan guilty, but one young Dominican, Brother Martin (played by Jeff Buterbaugh), clearly sympathized with her.

Though this was just a reading, it was staged with a set and lighting. Actors wore costumes with a period flair, even though they were not intended to be accurate for the 15th century. There will be more readings of the play next month at The Villages in Florida on October 26th and 27th. 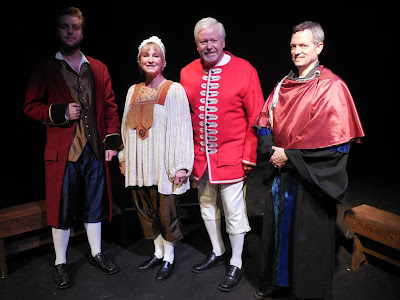