Tail End of the Comet

I really enjoyed the off-Broadway version of Natasha, Pierre, & the Great Comet of 1812. In fact it was one of the best plays of 2013, in my opinion.

When the show moved to Broadway with vocal superstar Josh Groban in the cast, I wondered if director Rachel Chavken would be able to reproduce the intimate feel of the show that gave it so much of its appeal.

Well, the reviews came back as very positive, so it seemed that, yes, she was able to keep the magic of the earlier version, in spite of losing the original Natasha, Phillipa Soo, who had gone on to create the role of Elizabeth Schuyler Hamilton in Lin-Manuel Miranda's blockbuster musical about a certain Treasury Secretary.

My spouse also enjoyed Chavken's off-Broadway version of Great Comet, and as she had undertaken to read its source material (a slim novel by Tolstoy called War and Peace), I told her I would buy us tickets to the Broadway show... as soon as she finished the book. Well, she isn't even half-way through with the novel (which is a mere 1,273 pages), but the show is closing, so I went ahead and got us tickets.

Okieriete "Oak" Onaodowan replaced Groban as Pierre, and I thought we were going to see him, but then he left the show, to be ultimately replaced by the show's creator, Dave Malloy, for the end of the run. However, until Malloy joins the cast, the role is being performed by Scott Strangland, the actor I saw last night. The original Broadway Natasha, Denée Benton, is still with the show, but I saw her understudy, Lauren Zakrin.

And was I disappointed? No. Strangland and Zakrin's big scene at the end of the show was amazing and had me in tears. Malloy does something quite clever, and in an otherwise sung-through musical stops the singing at a key moment to allow the main characters to speak their lines for the first time. This adds to the intensity, and allows the truth of the moment to stand out. We get to see a very real human connection between two flawed but fundamentally decent human beings.

Returning from the off-Broadway production is Amber Gray as Hélène, the promiscuous wife of Pierre who also helps to trap Natasha into an ill-fated affair with Hélène's brother, Anatole. (Yes, it's a Russian novel, so it's complicated.) Gray quite impressed me as Persephone in Hadestown (also directed by Chavken), so I was glad to see her again. It was likewise a pleasure to see Brittain Ashford again as Sonya. Her folk-infused number "Sonya Alone" stands out from the rest of the show both in terms of its musical idiom and its perspective from someone not at the center of the action, but deeply concerned about her friend.

Sadly, Great Comet is closing on September 3rd, so see it while you can. When I bought tickets, the guy at the box office advised me that the mezzanine seats were preferable to orchestra tickets, and after seeing the show from the mezzanine, I'm inclined to agree. Wherever you sit, however, I'm sure you'll enjoy it. 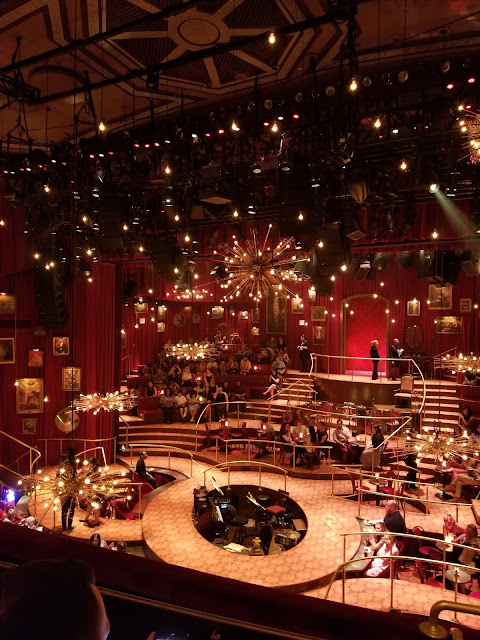 Posted by James Armstrong, Playwright at 11:49 AM