Designer Alexis Distler has created a split-level set for the piece that is probably better viewed the further back in the audience you sit. (I was in the front row, so it was a bit of a strain.) The frantic physicality of Michael Urie, however, is bound to be hilarious no matter where you're seated.

Urie plays Ivan Hlestakov, a lower-level bureaucrat from St. Petersburg who visits a small provincial town and gets mistaken for a powerful government inspector sent by the Czar. The mayor (played by Michael McGrath) tries to get everyone in the town to act like they're a model community, while simultaneously plying Hlestakov with bribes.

The mayor's wife (played by Mary Testa) flirts shamelessly with the visitor, while his daughter (played by Talene Monahon) is simultaneously repulsed by and attracted to this would-be government inspector. Monahon, who was superb as the by turns icy and fiery Blanche Sartorius in Widowers' Houses last year, gives a stand-out performance, showing her disdain and fascination for Hlestakov at the same time. The scene where he tries to woo her with song is hysterical.

Director Jesse Berger keeps the play in a remote 19th-century-ish Russia-ish setting, but still manages to drive home the parallels between kleptocracy and incompetence in Gogol's day and our present historical moment. Unlike The Public Theater's recent Julius Caesar, none of the figures look or talk like contemporary politicians, but they certainly act like them, making The Government Inspector imminently relevant.

The play is only running until August 20th, so see it soon. You can find out more information at: 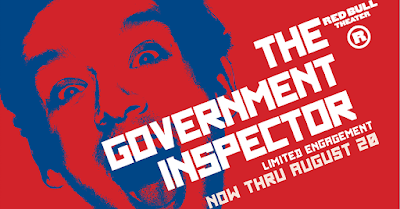 Posted by James Armstrong, Playwright at 8:25 AM