The 1974 Tony Award for Best Musical went to Raisin, an adaptation of Lorraine Hansberry's A Raisin in the Sun. Never seen it? Well now is your chance!

Dev Bondarin directed the piece, and it has a wonderful cast, including Warren Nolan Jr. as Walter Lee Younger, Ebony Marshall-Oliver as his mother Lena, Brandi Knox as his wife Ruth, and Sarita Amani Nash as his little sister Beneatha.

The musical streamlines the story, eliminating the whole plot line concerning Ruth's pregnancy, and getting rid of Beneath's boyfriend George Murchison. We don't miss him one bit, though, since that gives more time for Beneatha's other love interest, Joseph Asagai, played winningly by Cartreze Tucker. His song "Alaiyo" is one of the highlights of the show.

While the musical strips down the plot of the original, it also expands the cast, giving us a chorus of neighborhood regulars who provide transitional numbers like "Runnin' to Meet the Man" and "Booze." We also get to meet the offstage scoundrel Willie Harris, played in all is dodgey grandeur by Billy Lowrimore. Tony Perry plays a pastor who embodies Lena's deep faith in the number that begins Act II, "He Come Down This Morning."

Finding songs in pre-existing plays can be challenging. Hansberry's classic has one memorable moment with music where Walter Lee dances on a table to the sounds of a record playing traditional African music. As Hansberry describes in the stage directions: "He sees what we cannot, that he is a leader of his people, a great chief, a descendant of Chaka, and that the hour to march has come." In the number "African Dance," Raisin allows the audience to see this, too, with the chorus coming on dressed in traditional African clothes provided by costume designer Jeannipher Pacheco.

The best song in the show, though, is the satirical "Not Anymore" in which Walter, Ruth, and Beneatha recount the visit they received from the "welcoming committee" of the new neighborhood where they hope to move. Alas, the depiction of barely beneath the surface racism is all too topical now in 2017.

If you're interested in seeing the show, get your tickets soon. Raisin runs only through May 27. For more information check out: 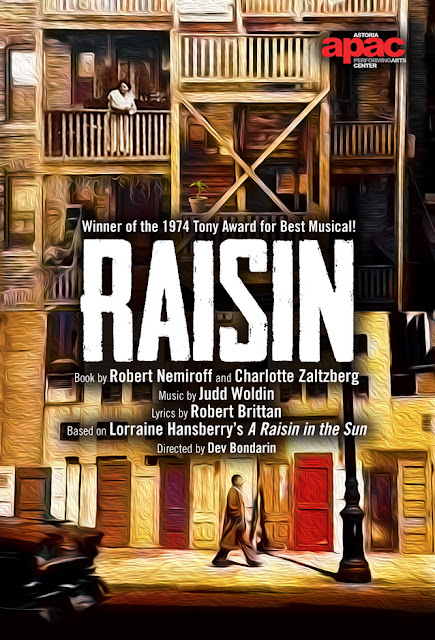