So the first review of my play Capital, now showing at the Detroit Repertory Theatre, was pretty good. Encore Michigan acutely observed that the play "mixes political philosophy with the story of a poor girl’s longing for a silk bonnet." Reviewer Martin F. Kohn also rightfully praised director Leah Smith who "emphasizes the fun in this world premiere production." 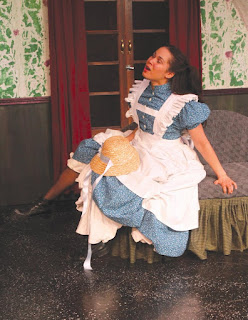 Daniel Skora then wrote a lovely write up in his blog, It's All Theatre.  He called the play an "enjoyably amusing and often hilarious comedy" and praised Lulu Dahl, who plays Jennie Marx, as "uniformly exceptional." Still, while it's always nice to get favorable notices in websites and blogs, what about the local newspaper, The Detroit Free Press? When were they going to run a review.

The answer? Today! And critic John Monaghan has given the show four out of four stars! You can read his full review here, but I want to give you some highlights:

"Groucho, Harpo and Chico are still the funniest members of the Marx family, but Karl Marx gets plenty of laughs in Detroit Rep's staging of 'Capital.' The inspired new comedy from James Armstrong recasts the philosopher and economist not as the wild-bearded father of communism but as the real-life father of a demanding teen who gets caught up in a zany farce...."

Monaghan has special praise for Harry Wetzel, who not only plays Karl Marx, but also designed the show's wonderful set. He writes: "With all of this kookiness spinning around him, you might assume that Marx is little more than a straight man. Not so. Wetzel has plenty to do in the verbal and the physical comedy departments, too, and he helps make the show feel much shorter than its nearly two-hour running time."

He also has great things to say about Ben Will, who plays multiple roles, and Sara Catheryn Wolf, who plays Nellie Ternan. Dahl again gets special (and deserved) recognition. He calls her Jenny "whip-smart" adding: "Like the show itself, she can be silly, but she's never stupid."

But perhaps my favorite quote is this:

"Playwright Armstrong has created a work that is at once old-fashioned and modern, cerebral and slapstick. Jenny might as well be talking about the latest iPhone rather than a new hat. The debate over what to print and the sanctity of the private versus the public continues to rage today courtesy of our tabloid culture."

But don't take the newspaper's word for it--see the play for yourself! Capital is playing until May 14th at Detroit Rep! 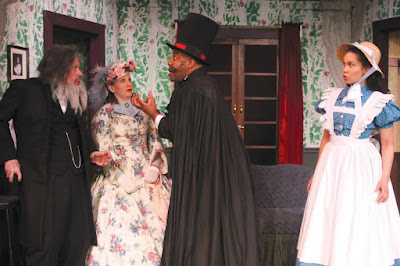