What do you do on a Saturday afternoon in Detroit? Go see my play Capital of course!

I just received the first box office report from Detroit Repertory Theatre for my farce Capital. The play follows the adventures of a still-unknown Karl Marx and his teenage daughter (who like many teenagers only cares about clothes and the latest expensive fashions).

According to the report, the Saturday matinee sold the most tickets during opening weekend. There were 136 of us there opening night on Thursday, March 23rd. The next next night when I returned to see the show again, 175 people came.

At the matinee on Saturday, though, there were 194 tickets sold! I missed that performance, because I was on my way to a wedding in Pittsburgh, but I hope folks enjoyed it! There weren't too many people who came out Saturday night, but Sunday's matinee and evening performances both sold well.

This just goes to show that each theatre is different. A lot of times, Saturday and Sunday matinees are practically empty, but other theatres cultivate daytime audiences. These days, there's plenty to do in downtown Detroit. (Including going to John K. King used bookstore, where I managed to pick up some great editions of plays while I was in town.) I'm honored that so many Detroiters are choosing to spend their time at my play.

Not that everyone is coming for my sake, of course. They're probably there for the stellar cast, which includes Harry Wetzel as Karl Marx and Lulu Dahl as his daughter Jenny. Sara Catheryn Wolfe does a wonderful job as the melodramatic actress Nelly Ternan, and Ben Will does quintuple duty playing a multitude of characters.

If you missed the first weekend, fear not! Capital is playing until May 14th, so get your tickets soon. Director Leah Smith did an excellent job staging the play, so it is not to be missed. 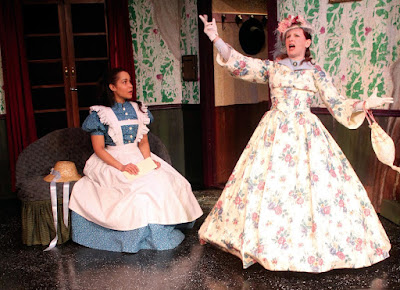