I've been fighting off a cold ever since I got back from the U.K., but I did want to post about The Barnwell Theatre in Cambridge, England.

Later renamed the Festival Theatre, and today a Buddhist Center, the Barnwell Theatre was designed by William Wilkins, who also designed Downing College, as well as the National Gallery in London. Originally built in 1814, this is what it looks like today: 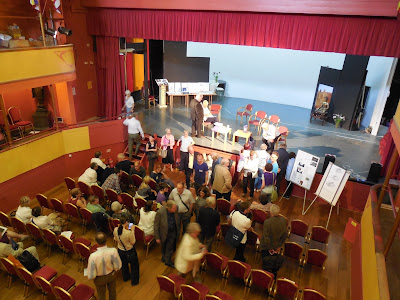 While it's difficult to recognize the features of a Regency-era theatre, you can still see the pit area (what we would today call the orchestra seats) where serious theatre fans sat, paying moderate prices. More exclusive seats were available in the boxes, each box accessible by its own private door, as you can see in this picture: 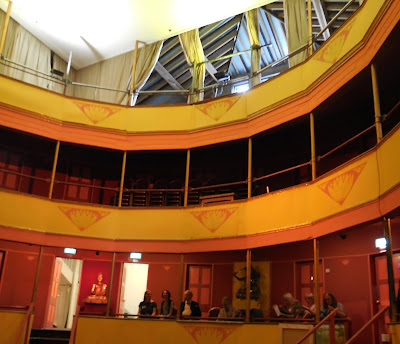 Above the boxes was the area known as the gallery, where poorer audience members would sit or stand to watch the show. They typically had to use a separate entrance, so as to not mingle with the more respectable theatre patrons. This tradition remains alive and well in some theatres, such as the Theatre Royal Drury Lane, where patrons in the balcony are sent around to the side of the theatre to take stairs that don't connect with the main lobby.

When I toured the Barnwell Theatre in Cambridge, our hosts noted that if you had sat on the floorboards like benches, you would not have seen the edge of the stage, which projected out even further from where it is today. This supports the argument that spectators in the gallery stood, rather than sat. If you stood in the gallery at the Barnwell, your view would have been something like this: 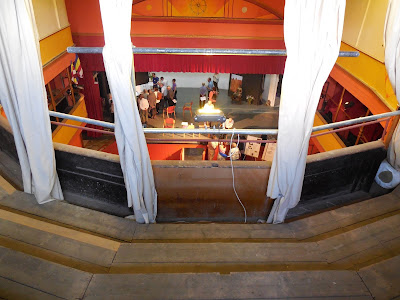 Notice, also, there was a good deal of space under the stage. Some of the original stage machinery is down there today, but alas, not in working order. You can see down into that space in this shot: 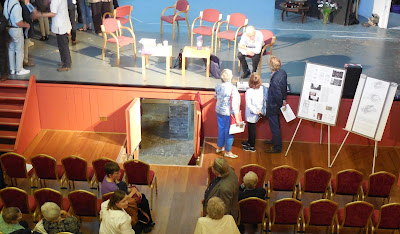 It's sad that the space is no longer a theatre, but the folks at the Cambridge Buddhist Centre were super nice in showing us around the place! I was very glad to see it.
Posted by James Armstrong, Playwright at 3:02 PM