Trojan Women at The Flea

Last night, I saw The Flea Theater's production of The Trojan Women in a new adaptation by Ellen McLaughlin. 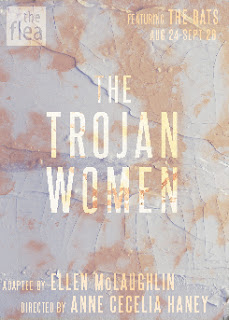 Set in modern times, this production remains faithful to the spirit of the original play by Euripides. It begins, like the original, with a prologue by the god Poseidon (played here by Thomas Muccioli). McLaughlin leaves out the conversation between Poseidon and Athena, however, and goes right into the chorus of captive women, led by Hecuba, once Queen of Troy, now a slave.

DeAnna Supplee (in spite of being way too young to play an old woman like Hecuba) does an admirable job, summoning up a queenly grandeur, despite her degraded position. Even more impressive is Lindsley Howard as Hecuba's mad daughter Cassandra. Granted by Apollo the gift of prophesy, but cursed to have no one believe her, Cassandra has known all along precisely what will happen to everyone, but has always been as powerless as the rest of the women are now.

The biggest change McLaughlin introduces into the play has to do with Helen, the woman whose abduction and subsequent faithlessness caused the whole Trojan War. Euripides makes the conflict in his play between Helen and her husband, Menelaus. Helen blames her affair with Paris (also known as Alexander) on Hecuba, claiming (in the Richmond Lattimore translation):

She mothered the beginning of all this wickedness.
For Paris was her child. And next to her the old king,
who would not destroy the infant Alexander, that dream
of the firebrand's agony, has ruined Troy, and me.

Though for Euripides, any justice Helen will receive will be at the hands of her husband, McLaughlin decides to show a more harrowing account of the legendary beauty. Anticipating that Menelaus might relent and let Helen live, the chorus turns on her, torturing her savagely offstage. The Flea's production allows the audience to picture the brutality in their imaginations. When Helen (touchingly played by Rebeca Rad) re-emerges, we see the depths of depravity of these women. They are now not only victims, but perpetrators as well.

The heart of the play, however, is the story of Hector's wife, Andromache (played here by Casey Wortman). The Trojan princess cradles an infant son able to--perhaps--one day return and rebuild the towers of Troy. It is a credit to Anne Cecelia Haney's directing that for a moment in this production, we actually believe that there could be a happy ending, in spite of what we know comes next. The soldier Talthybius (Phil Feldman, from The Flea's wonderful production of The Place We Built) enters to take the boy away and hurl him to his death from what remains of Troy's walls.

It has been said that if theatre really could change the world, after The Trojan Women there never would have been another war. Even if it seems like we can't change the world, however, that doesn't mean we can't try. Kudos to McLaughlin and The Flea for at least trying to do their part.