I just got back from seeing the latest edition of Rule of 7x7, a showcase for short plays at The Tank held every other month.

Brett Epstein hosts the series, which takes seven playwrights and asks each writer to write one rule all the plays must follow. This batch of rules included that there must be violence, someone must eat something onstage, and there must be a 30-second dialogue-free moment/scene/montage set to a 90s pop song.

With such strict (and quirky) parameters, it is unlikely anyone will write a timeless drama, but the rules help free up imaginations to conceive some wonderfully funny and sometimes surprisingly touching moments. The first play, Rachael Mason's Funny Seeing You Here, was probably the best. Mason takes a simple premise, two acquaintances awkwardly meeting at the same wedding, and skillfully draws it out into some hilarious extremes. By the time the audience sees a flashback to what the two characters did earlier (memorably set to the music of Ricky Martin), they are practically rolling in the aisles with laughter.

Jordan Swisher's V Chill Vampires overcomes an awkward title to satirize our technologically obsessed culture by portraying two "friendly" vampires making a YouTube video about how they're really not scary at all. Just as the audience is getting used to the tension between the bloodsucking habits of the vampiric duo and their calm, reasonable demeanor, Swisher adds a new twist: a human they have kidnapped in order to convince her (in a really nice, non-threatening way) that she would really rather be a vampire... wouldn't she?

The even more awkwardly titled FATFATFATFATFATFATFAT! by James Anthony Tyler lacked many of the laughs of the first two plays, but it did benefit from a memorable performance by Amelia Fowler as Shayla, a heavy-set woman unashamed of her body and unwilling to take flak about her weight from anybody. Rounding out the first half of the evening was Kev Berry's Exit Through the Sock Hop, a send-up of mid-twentieth-century nostalgia featuring increasingly explicit sexual dance moves and a drag performance by Blake Deadly.

One of the challenges of ten-minute plays is they can seem too enclosed, making the audience feel a bit claustrophobic. Rachel Lin's poker drama No Limit Hold 'Em avoids that by introducing on stage a cast of eight (including Lin herself) actors who create a rich tapestry of voices. Following this was host Epstein's own play, The Song Is For Lisa, which has only two characters. However, the play's apparent simplicity (with high school friends playing a game of Mario Kart) gradually becomes more emotionally compelling as the piece progresses. Even if in the grand scheme of things teenage friendships don't seem to matter as much as the life-and-death stakes Lin introduces in her onstage poker game, Epstein convinces us that in fact... they do.

The final play of the evening, Dan Moyer's The Lifestyle, takes place at a Tommy Bahama clothing store, with the wonderful Alex Herrald portraying the mysterious Tommy behind the over-priced aloha-shirt empire. It was a fitting end to a fun night of theatre.

Rule of 7x7 is a regular event at The Tank, so if you're interested in checking out the next installment in a couple months, go to: 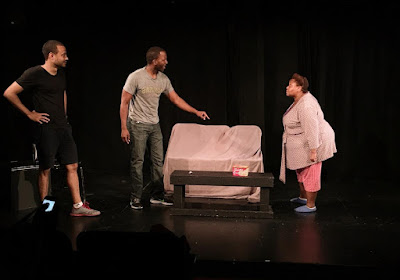