The Place We Built

Last night, I saw The Flea Theater's wonderful production of The Place We Built by Sarah Gancher. The play takes the audience on a moving journey through recent history in Hungary, erupting in a riotous party along the way. 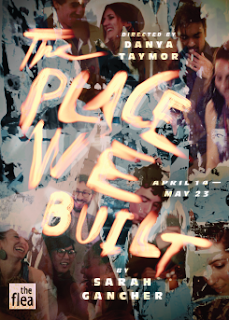 The story of The Place We Built gets filtered through the character of Aisha (Isabelle Pierre), an American woman living in Hungary. Aisha is documenting on film the government's efforts to shut down the Seagull, a Budapest nightlife hotspot that has also become a center for political dissent.

A rag-tag assembly of the Seagull's founders try to decide whether or not to stay in their cramped building while a mass of police assemble outside, ready to break arms if they need to in order to shut down the club. Julia (Cleo Gray) is intent on staying, but others favor abandoning the space in order to survive and fight again another day.

The play then flashes back to the history of the Seagull, which begins when Ben (Tom Costello) throws a "Grandma Party" inviting his friends to his grandmother's old flat. Squatting in the abandoned building, they wear the dead woman's old wigs and read aloud from her very personal letters. A heart-rending tale of the grandmother's survival in Budapest's Jewish ghetto during the Holocaust gets filtered through 20-something hipsters, and the result is oddly effective.

Most moving is a song composed by a closeted gay musician, Mihaly (Brendan Dalton), utilizing the text of one of the grandmother's letters. Music joyously erupts a number of times in this production, and my one regret about the show was that there wasn't more of it.

While some of the characters in the play tend to blur together (there are only so many variations on young, sexy, idealistic artist), Mihaly stands out. In a New York City where Gay Pride has corporate sponsors and same-sex marriage is a legal right, it can be easy to forget that there are places that seem very much like our own city, but where appearing in public with a partner is an act of near-suicidal bravery.

Danya Taymor does a deft job directing the piece, and Claudia Brown's costumes wonderfully evoke the Bohemian atmosphere of the Seagull. The play also utilizes some delightful puppets designed by Marte Johanne Ekhougen.

The Place We Built is only running through May 30th, so see it while you still can. For more information, visit:

The Flea
Posted by James Armstrong, Playwright at 7:09 AM