Last night I saw Theatre for a New Audience's stellar production of A Doll's House. This could easily be the best production of the classic play that New York audiences will have a chance to see in their lifetimes, so go now!

What's so great about it? Let's start with the cast. Nora is played by Maggie Lacey with buoyant energy and impeccable comic timing. Comedy? In Ibsen? YES! Those who know Norwegian have told me that Henrik Ibsen's plays are packed with humor, and Et dukkehjem (perhaps more accurately translated as A Doll House) is no exception. TFANA uses Thornton Wilder's adaptation, which deftly picks up on the comedy, giving Lacey plenty of opportunities to shine. 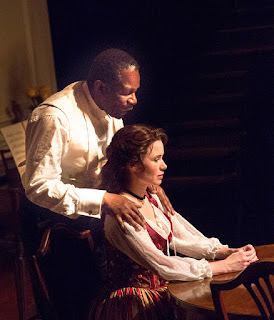 John Douglas Thompson, who memorably played Tamburlaine the Great at TFANA two years ago, is the most interesting Thorwald I've ever seen. Though Thompson is a bit older than I generally picture the character, his age added to the role. We immediately get the sense that this is a man at the peak of his career, more than ready to take over as president of the local bank. The fact that he is older than his wife does not excuse his behavior, but it does make his patronizing attitude toward her appear as something we might see today and not just a relic of the nineteenth century.

And what do you get when you put Lacey and Thompson on stage together? Not just funny Ibsen, but hot, sexy Ibsen! These two have incredible chemistry on stage. With the intense physical attraction they show for one another, we have no questions about why this seemingly mismatched pair married each other. The fact that both actors look fabulous in their costumes designed by Susan Hilferty doesn't hurt, either.

The entire cast is excellent, but Nigel Gore stands out as Doctor Rank, imbuing the character with a flippant gallows humor. Linda Powell and Jesse J. Perez are wonderful as Christina Linden and Nils Krogstad, and watching these two old flames reignite in the third act is a joy. This production also keeps the two children (played by the adorable Ruben Almash and Jayla Lavender Nicholas), who return to the stage for one last poignant tableau at the end of the play.

Director Arin Arbus has staged the play with the audience on two sides of the stage. This keeps the action intimate, no matter where you are in the audience, and prevents the characters from being crowded out by the excessive detail of a typical box set. During the final scene, the lights indicate a dawning new day, and at the same time, the audience becomes more more visible to one another. Gazing across the stage, we are confronted with our 21st-century counterparts on the other side.

It's time to stop acting out or childish fantasies and to see ourselves as we really are, Nora says as the end of the play. In those last moments, the play asks us to consider how much of our own lives are just acts and whether or not we a truly living, as we tell ourselves we are. If we accept the play's challenge and reflect upon our own self-imposed delusions, we might find that the nineteenth century isn't that far off after all.

A Doll's House is playing in repertory with August Strindberg's The Father. I'll be seeing that tonight. If you're interested in seeing them, check out:

Theatre for a New Audience 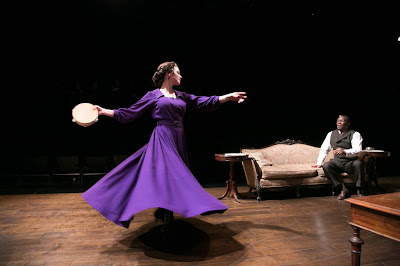 Posted by James Armstrong, Playwright at 6:50 AM